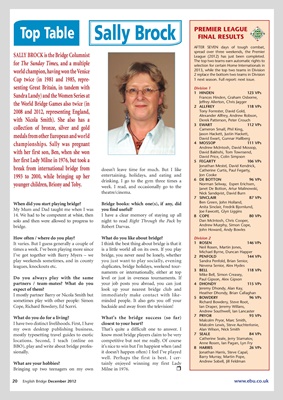 AFTER SEVEN days of tough combat,

spread over three weekends, the Premier

SALLY BROCK is the Bridge Columnist League (2012) has just been completed.

for The Sunday Times, and a multiple selection for certain Home Internationals in

2013, while the top two teams in Division

world champion, having won the Venice 2 replace the bottom two teams in Division

with Nicola Smith). She also has a Derek Patterson, Peter Crouch

medals from other European and world David Ewart, Gunnar Hallberg

with her first son, Ben, when she won David Bakhshi, Tom Townsend,

break from international bridge from doesn’t leave time for much. But I like Catherine Curtis, Paul Fegarty,

1993 to 2000, while bringing up her entertaining, holidays, and eating and Jon Cooke

drinking. I go to the gym three times a 6 DE BOTTON 96 VPs

younger children, Briony and Toby. week. I read, and occasionally go to the

When did you start playing bridge? Bridge books: which one(s), if any, did Ben Green, John Holland,

My Mum and Dad taught me when I was you find useful? Joe Fawcett, Glyn Liggins

14. We had to be competent at whist, then I have a clear memory of staying up all 8 COPE 80 VPs

solo and then were allowed to progress to night to read Right Through the Pack by Dan McIntosh, Chris Cooper,

How often / where do you play? What do you like about bridge? Division 2

It varies. But I guess generally a couple of I think the best thing about bridge is that it 1 ROSEN 146 VPs

times a week. I’ve been playing more since is a little world all on its own. If you play Michael Byrne, Duncan Happer

I’ve got together with Barry Myers – we bridge, you never need be lonely, whether 2 PENFOLD 144 VPs

naments or internationally, either at top Mike Bell, Simon Creasey,

Do you always play with the same level or just in overseas tournaments. If Paul Gipson, Alex Gipson

partners / team-mates? What do you your job posts you abroad, you can just 4 DHONDY 115 VPs

expect of them? look up your nearest bridge club and Jeremy Dhondy, Alan Kay,

sometimes play with other people: Simon minded people. It also gets you off your Richard Bowdery, Steve Root,

What do you do for a living? What’s the bridge success (so far) Malcolm Pryor, Marc Smith,

I have two distinct livelihoods. First, I have closest to your heart? Malcolm Lewis, Steve Auchterlonie,

my own desktop publishing business, That’s quite a difficult one to answer. I Alan Wilson, Nick Smith

locations. Second, I teach (online on competitive but not me really. Of course Anne Rosen, Ian Pagan, Lyn Fry

BBO), play and write about bridge profes- it’s nice to win but I’m happiest when (and 8 HARRIS 26 VPs

What are your hobbies? tainly enjoyed winning my first Lady

Bringing up two teenagers on my own Milne in 1976. r