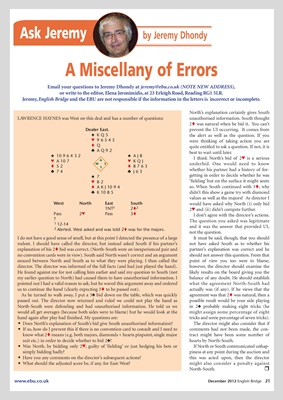 A Miscellany of Errors

LAWRENCE HAYNES was West on this deal and has a number of questions: unauthorised information. South thought

2t was natural when he bid it. You can’t

Dealer East. prevent the UI occurring. It comes from

´ KQ5 the alert as well as the question. If you

t Q quite entitled to ask a question. If not, it is

I think North’s bid of 2™ is a serious

W E underbid. One would need to know

´ 7 getting in order to decide whether he was

values as well as the majors? As director I

Pass 2™ Pass 3t I don’t agree with the director’s actions.

? The question you asked was legitimate

2 Alerted. West asked and was told 2t was for the majors.

and it was the answer that provided UI,

I do not have a good sense of smell, but at this point I detected the presence of a large It must be said, though, that you should

rodent. I should have called the director, but instead asked South if his partner’s not have asked South as to whether his

no convention cards were in view). South said North wasn’t correct and an argument should not answer this question. From that

ensued between North and South as to what they were playing. I then called the point of view you too were to blame;

director. The director was informed of the full facts (and had just played the hand). however, the director should examine the

my earlier question to North) had caused them to have unauthorised information. I balance of any doubt. He should establish

pointed out I had a valid reason to ask, but he waved this argument away and ordered what the agree ment North-South had

us to continue the hand (clearly expecting 3t to be passed out). actually was (if any). If he views that the

As he turned to walk away, I put a 3´ bid down on the table, which was quickly agreement was that 2t was natural, then a

passed out. The director now returned and ruled we could not play the hand as possible result would be your side playing

North-South were defending and had unauthorised information. He told us we in 2´ probably making eight tricks (he

hand again after play had finished. My questions are: tricks and some percentage of seven tricks).

• Does North’s explanation of South’s bid give South unauthorised information? The director might also consider that if

• If so, how do I prevent this if there is no convention card to consult and I need to comments had not been made, the con-

know what 2t means (e.g. both majors, diamonds + hearts pinpoint, single major tract might have been some number of

suit etc.) in order to decide whether to bid 2´? hearts by North-South.

• Was North, by bidding only 2™, guilty of ‘fielding’ or just hedging his bets or If North or South communicated unhap-

simply bidding badly? piness at any point during the auction and

• What should the adjusted score be, if any, for East-West? might also consider a penalty against