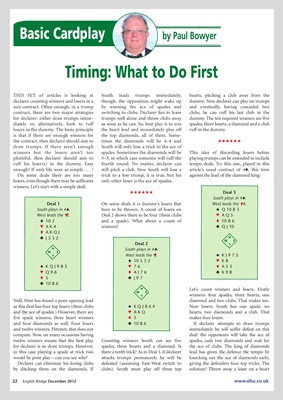 Timing: What to Do First

THIS SET of articles is looking at South leads trumps immediately, hearts, pitching a club away from the

declarer counting winners and losers in a though, the opposition might wake up dummy. Now declarer can play on trumps

suit contract. Often enough, in a trump by winning the ace of spades and and eventually, having conceded two

contract, there are two major strategies switching to clubs. Declarer has to leave clubs, he can ruff his last club in the

for declarer: either draw trumps imme- trumps well alone and throw clubs away dummy. The ten required winners are five

diately or, alternatively, look to ruff as soon as he can. So, best play is to win spades, three hearts, a diamond and a club

is that if there are enough winners for the top diamonds, all of them. Some-

the contract, then declarer should aim to times the diamonds will be 4–4 and HHHHHH

draw trumps. If there aren’t enough South will only lose a trick to the ace of

winners but the losers aren’t too spades. Sometimes the diamonds will be This idea of discarding losers before

plentiful, then declarer should aim to 5–3, in which case someone will ruff the playing trumps can be extended to include

ruff his loser(s) in the dummy. Easy fourth round. No matter, declarer can tempo deals. Try this one, played in this

enough? If only life were so simple . . . ! still pitch a club. Now South will lose a article’s usual contract of 4´, this time

On some deals there are too many trick to a low trump, it is true, but his against the lead of the diamond king:

losers, even though there may be sufficient only other loser is the ace of spades.

Deal 1 On some deals it is dummy’s losers that West leads the tK.

as this deal has four top losers (three clubs ´ KQJ864 Now losers: South has one spade, no

and the ace of spades.) However, there are ™ AKQ hearts, two diamonds and a club. That

and four diamonds as well. Four losers ® 10 8 6 If declarer attempts to draw trumps

and twelve winners. Hmmm, that does not immediately he will suffer defeat on this

compute. Now, on many occasions having deal: the opponents will take the ace of

for declarer is to draw trumps. However, spades, three hearts and a diamond. Is the ace of clubs. The king of diamonds

in this case playing a spade at trick two there a tenth trick? As in Deal 1, if declarer lead has given the defence the tempo by

would be poor play – can you see why? attacks trumps prematurely he will be knocking out the ace of diamonds early,

by ditching them on the diamonds. If clubs). South must play off three top solution? Throw away a loser on a heart