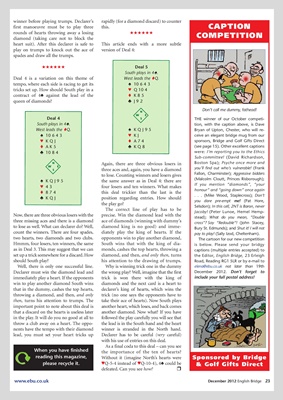 winner before playing trumps. Declarer’s rapidly (for a diamond discard) to counter

first manoeuvre must be to play three this. CAPTION

rounds of hearts throwing away a losing HHHHHH

diamond (taking care not to block the COMPETITION

heart suit). After this declarer is safe to This article ends with a more subtle

play on trumps to knock out the ace of version of Deal 4:

spades and draw all the trumps.

Deal 4 is a variation on this theme of West leads the tQ.

contract of 4´ against the lead of the t K85

Deal 4 S THE winner of our October competi-

South plays in 4´. tion, with the caption above, is Dave

West leads the tQ. ´ KQJ95 Bryan of Upton, Chester, who will re-

N Again, there are three obvious losers in Boston Spa); Psyche once more and

S three aces and, again, you have a diamond you’ll find out who’s vulnerable! (Frank

If you mention “diamonds”, “your

honour” and “going down” once again

t 874 this deal trickier than the last is the

® KQJ position regarding entries. How should

you dare pre-empt me! (Pat Hore,

Selsdon); In this cell, 2NT is Baron, never

The correct line of play has to be Jacoby! (Peter Lunoe, Hemel Hemp -

Now, there are three obvious losers with the precise. Win the diamond lead with the stead); What do you mean, “Double

three missing aces and there is a diamond ace of diamonds (winning with dummy’s cross”? Say “Redouble”! (John Stacey,

to lose as well. What can declarer do? Well, diamond king is no good) and imme- Bury St. Edmunds); and Shut it! I will not

count the winners. There are four spades, diately play the king of hearts. If the pay to play! (Sally Izod, Cheltenham).

two hearts, two diamonds and two clubs. opponents win to play another diamond, The cartoon for our new competition

Hmmm, four losers, ten winners, the same South wins that with the king of dia- is below. Please send your bridgy

as in Deal 3. This may suggest that we can monds, cashes the top hearts, throwing a captions (multiple entries accepted) to

set up a trick somewhere for a discard. How diamond, and then, and only then, turns the Editor, English Bridge, 23 Erleigh

should South play? his attention to the drawing of trumps. Road, Reading RG1 5LR or by e-mail to

Well, there is only one successful line. Why is winning trick one in the dummy elena@ebu.co.uk not later than 19th

Declarer must win the diamond lead and the wrong play? Well, imagine that the first December 2012. Don’t forget to

immediately play a heart. If the opponents trick is won there with the king of include your full postal address!

that in the dummy, cashes the top hearts, declarer’s king of hearts, which wins the

throwing a diamond, and then, and only trick (no one says the opponents have to

then, turns his attention to trumps. The take their ace of hearts). Now South plays

important point to note about this deal is another heart, which loses, and back comes

that a discard on the hearts is useless later another diamond. Now what? If you have

in the play. It will do you no good at all to followed the play carefully you will see that

throw a club away on a heart. The oppo- the lead is in the South hand and the heart

nents have the tempo with their diamond winner is stranded in the North hand.

lead, you must set your heart tricks up Declarer has to be careful (very careful)

with his use of entries on this deal.

As a final coda to this deal – can you see

When you have finished the importance of the ten of hearts?

reading this magazine, Without it (imagine North’s hearts were Sponsored by Bridge

defeated. Can you see how? r