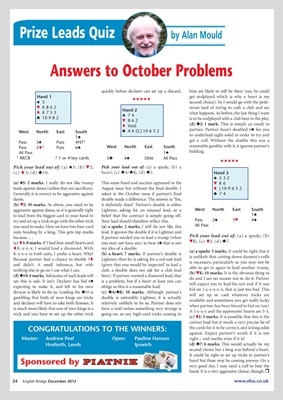 quickly before declarer can set up a discard. him are likely to still be there (yes, he could

Hand 1 get endplayed which is why a heart is my

™ K862 strian lead of trying to cash a club and see

t K753 what happens. As before, the last thing I want

Pass 3´ Pass 4NT1 get a ruff. Without the double this was a

leads against slams (unless they are sacrifices). August issue but without the final double. I t J 10 9 6 3 2

slams. double made a difference. The answer is: ‘Yes,

aggressive against slams, so it is generally right Lightner, asking for an unusual lead, or a West North East South

to lead from the biggest card in your hand to belief that the contract is simply going off. 1´

try and set up a trick to go with the other trick Your lead should therefore reflect this. Pass 2´ 3™ 4´

you need to make. Here we have two four-card (a) a spade: 2 marks. I still do not like this All Pass

suits heading by a king. This gets top marks lead. It ignores the double if it is Lightner and

tK-x-x-x, I would lead a diamond. With my idea of a double.

is unlikely that cutting down dummy’s ruffs

Because partner had a chance to double 5t Lightner, then he is asking for a red-suit lead

is necessary, particularly as you may not be

and didn’t. A small inference, but with (given that you would be ‘expected’ to lead a

able to get in again to lead another trump.

nothing else to go on I use what I can. club, a double does not ask for a club lead

(d) ®10: 4 marks. Advocates of such leads will here). If partner wanted a diamond lead, that

do and I see no reason not to do it. Partner

say this is safe. It isn’t. Declarer has bid 6´ is a problem, but if a heart at least you can

will expect you to lead his suit and if it was

expecting to make it, and left to his own oblige so this is a reasonable lead.

will set up or cash whatever tricks are

gambling that both of your kings are tricks double is ostensibly Lightner, it is actually

available and sometimes you get really lucky

and declarer will have to take both finesses. It relatively unlikely to be so. Partner does not

when partner has been forced to bid on (say)

trick and you have to set up the other trick going on, so any high-card tricks coming to

correct lead but it needs a very precise lie of

the cards for it to be correct, and is long odds

CONGRATULATIONS TO THE WINNERS: against. Expect partner’s wrath if it is not

Master: Andrew Peel Open: Pauline Hanson right – and maybe even if it is!

Hosforth, Leeds Ipswich (d) ®7: 6 marks. This would actually be my

second choice but a long way behind a heart.

It could be right to set up tricks in partner’s

Sponsored by hand but these may be coming anyway. On a

very good day, I may need a ruff to beat the

hand. It is a very aggressive choice, though. r