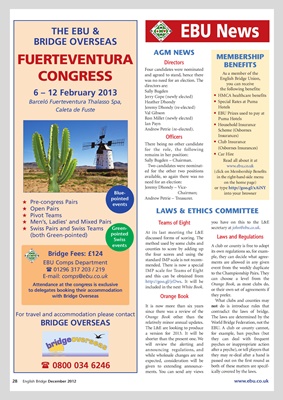 CONGRESS and agreed to stand, hence there

was no need for an election. The

As a member of the

• EBU Prizes used to pay at

There being no other candidate • Club Insurance

for the role, the following (Osbornes Insurances)

remains in her position: • Car Hire

Sally Bugden – Chairman. Read all about it at

ed for the other two positions (click on Membership Benefits

available, so again there was no in the right-hand-side menu

need for an election: on the home page)

Blue- Chairman; into your browser

H Men’s, Ladies’ and Mixed Pairs Teams of Eight you have on this to the L&E

pointed At its last meeting the L&E

(both Green-pointed) discussed forms of scoring. The Laws and Regulations

events method used by some clubs and

A club or county is free to adopt

counties to score by adding up

its own regulations so, for exam-

Bridge Fees: £124 the four scores and using the

ple, they can decide what agree-

standard IMP scale is not recom-

EBU Comps Department mended. There is now a special

ments are allowed in any given

event from the weekly duplicate

to the Championship Pairs. They

E-mail: comps@ebu.co.uk and this can be obtained from

can choose a level from the

Attendance at the congress is exclusive Orange Book, as most clubs do,

included in the next White Book.

What clubs and counties may

since there was a review of the contradict the laws of bridge.

The L&E are looking to produce

World Bridge Federation, not the

EBU. A club or county cannot,

a version for 2013. It will be for example, ban psyches (but

shorter than the present one. We they can deal with frequent

will review the alerting and psyches or inappropriate action

announcing regulations, and after a psyche), or tell players that

expected, consideration will be passed out on the first round as

ments. You can send any views ically covered by the laws.