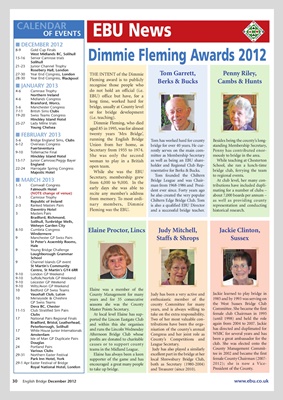 n JANUARY 2013 recognise those people who

4-6 Camrose Trophy do not hold an official (i.e.

Northern Ireland EBU) office but have, for a

5-6 Bridge England Sims, Clubs running the English Bridge Tom has worked hard for county Besides being the county’s long-

6-12 Overseas Congress Union from her home, as bridge for over 40 years. He cur- standing Membership Secretary,

Hinckley Island Hotel She was only the second mittee as Membership Secretary mously to bridge in the area.

Majestic Hotel While she was the EBU resentative for Berks & Bucks. bridge club, ferrying the team

Bridge League and was Chair- At club level, her many con-

Falmouth Hotel early days she was able to

dent ever since. Forty years ago mating for a number of clubs –

(NOTE change of venue) recite any member’s address he also created the very popular about 7,000 boards per annum –

1-3 Camrose Trophy from memory. To most ordi-

Daventry Hotel Fleming was the EBU. and a successful bridge teacher. historical research.

10 Bedford GP Swiss Teams Elaine was a member of the

Vauxhall Club, Luton County Management for many Judy has been a very active and Jackie learned to play bridge in

seasons she was the County county Committee for many

Clubs At local level Elaine has sup- take on the extra responsibility. female club Chairman in 1995

Bradford, Bristol, Leatherhead, tributions have been the orga- again from 2004 to 2007. Jackie

and within this she organises

Douglas causes or to support county League Secretary. club. She was elected onto the