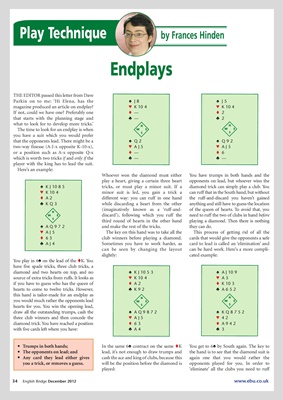 THE EDITOR passed this letter from Dave

that starts with the planning stage and ® — ® 2

what to look for to develop more tricks.’ N N

you have a suit which you would prefer

player with the king has to lead the suit.

play a heart, giving a certain three heart opponents on lead, but whoever wins the

™ K 10 4 minor suit is led, you gain a trick a can ruff that in the South hand, but without

t A2 different way: you can ruff in one hand the ruff-and-discard you haven’t gained

(imaginatively known as a ‘ruff-and- of the queen of hearts. To avoid that, you

W E discard’), following which you ruff the need to ruff the two of clubs in hand before

third round of hearts in the other hand playing a diamond. Then there is nothing

t 63 club winners before playing a diamond. cards that would give the opponents a safe

® AJ4 Sometimes you have to work harder, as card to lead is called an ‘elimination’ and

can be seen by changing the layout can be hard work. Here’s a more compli-

this hand is tailor-made for an endplay as N

you would much rather the opponents lead W E W E

hearts for you. You win the opening lead,

three club winners and then concede the ™ AJ5 ™ 42

diamond trick. You have reached a position t 63 t A942

• Trumps in both hands; In the same 6´ contract on the same tK You get to 6´ by South again. The key to

• The opponents on lead; and lead, it’s not enough to draw trumps and the hand is to see that the diamond suit is

• Any card they lead either gives cash the ace and king of clubs, because this again one that you would rather the

you a trick, or removes a guess. will be the position before the diamond is opponents played for you. In order to

played: ‘eliminate’ all the clubs you need to ruff