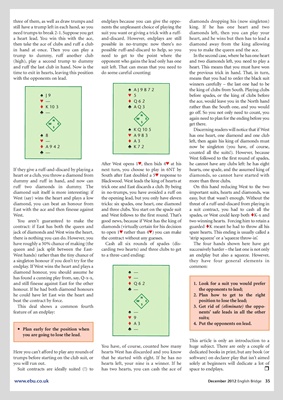 three of them, as well as draw trumps and endplays because you can give the oppo- diamonds dropping his (now singleton)

still have a trump left in each hand, so you nents the unpleasant choice of playing the king. If he has one heart and two

need trumps to break 2-1. Suppose you get suit you want or giving a trick with a ruff- diamonds left, then you can play your

a heart lead. You win this with the ace, and-discard. However, endplays are still heart, and he wins but then has to lead a

then take the ace of clubs and ruff a club possible in no-trumps: now there’s no diamond away from the king allowing

in hand at once. Then you can play a possible ruff-and-discard to help, so you you to make the queen and the ace.

trump to dummy, ruff another club need to get to the point where the In the second case, where he has one heart

(high), play a second trump to dummy opponent who gains the lead only has one and two diamonds left, you need to play a

and ruff the last club in hand. Now is the suit left. That can mean that you need to heart. This means that you must have won

time to exit in hearts, leaving this position do some careful counting: the previous trick in hand. That, in turn,

with the opponents on lead. means that you had to order the black suit

winners carefully – the last one had to be

´ AJ9872 the king of clubs from South. Playing clubs

W E again need to plan for the ending before you

W E get there.

´ K Q 10 5 Discerning readers will notice that if West

™ — t A3 left, then again his king of diamonds must

® — counted all the suits!). However, because

West followed to the first round of spades,

After West opens 1™, then bids 4™ at his he cannot have any clubs left: he has eight

If they give a ruff-and-discard by playing a next turn, you choose to play in 6NT by hearts, one spade, and the assumed king of

heart or a club, you throw a diamond from South after East doubled a 5™ response to diamonds, so cannot have started with

dummy and ruff in hand, and now can Blackwood. West leads the king of hearts at more than three clubs.

ruff two diamonds in dummy. The trick one and East discards a club. By being On this hand reducing West to the two

diamond suit itself is more interesting: if in no-trumps, you have avoided a ruff on important suits, hearts and diamonds, was

West (say) wins the heart and plays a low the opening lead, but you only have eleven easy, but that wasn’t enough. Without the

diamond, you can beat an honour from tricks: six spades, one heart, one diamond threat of a ruff-and-discard from playing in

East with the ace and then finesse against and three clubs. You start on the spade suit a suit contract, you had to cash all the

West. and West follows to the first round. That’s spades, or West could keep both tK-x and

You aren’t guaranteed to make the good news, because if West has the king of two winning hearts. Forcing him to retain a

contract: if East has both the queen and diamonds (virtually certain for his decision guarded tK meant he had to throw all his

jack of diamonds and West wins the heart, to open 1™ rather than 4™) you can make spare hearts. This ending is usually called a

there is nothing you can do. However, you the contract without any guesses. ‘strip squeeze’ or a ‘squeeze throw-in’.

West hands) rather than the tiny chance of to a three-card ending: an endplay but also a squeeze. However,

endplay. If West wins the heart and plays a common:

diamond honour, you should assume he ´ —

and still finesse against East for the other t Q62 1. Look for a suit you would prefer

honour. If he had both diamond honours ® — the opponents to lead;

he could have let East win the heart and N

2. Plan how to get to the right

beat the contract by force. W E position to lose the lead;

This deal shows a common fourth 3. Get rid of (eliminate) the oppo-

feature of an endplay: ´ — nents’ safe leads in all the other

• Plan early for the position when ® —

you are going to lose the lead.

This article is only an introduction to a

You have, of course, counted how many huge subject. There are only a couple of

Here you can’t afford to play any rounds of hearts West has discarded and you know dedicated books in print, but any book (or

trumps before starting on the club suit, or that he started with eight. If he has no software) on declarer play that isn’t aimed

you will run out. hearts left, your nine is a winner. If he solely at beginners will dedicate a lot of

Suit contracts are ideally suited (!) to has two hearts, you can cash the ace of space to endplays. r