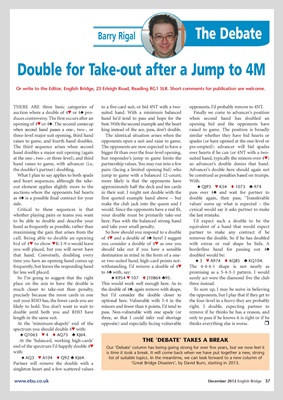 Double for Take-out after a Jump to 4M

THERE ARE three basic categories of to a five-card suit, or bid 4NT with a two- opponents, I’d probably remove to 4NT.

auction where a double of 4™ or 4´ pro- suited hand. With a minimum balanced Finally we come to advancer’s position

duces controversy. The first occurs after an hand he’d tend to pass and hope for the when second hand has doubled an

opening of 4™ or 4´. The second comes up best. With the second example and the heart opening bid and the opponents have

when second hand passes a one-, two-, or king instead of the ace, pass, don’t double. raised to game. The position is broadly

three-level major suit opening, third hand The identical situation arises when the similar whether they have bid hearts or

raises to game, and fourth hand doubles. opponents open a suit and raise to game. spades (or have opened at the one-level or

The third sequence arises when second The opponents are now expected to have a pre-empted): advancer will bid spades

hand doubles a major suit opening (again bigger fit than over the four-level opening, over hearts if he can (or 4NT with a two-

at the one-, two-, or three-level), and third but responder’s jump to game limits the suited hand, typically the minors over 4™)

hand raises to game, with advancer (i.e, partnership values. You may run into a few so advancer’s double denies that hand.

What I plan to say applies to both spade jump to game with a balanced 12-count; be construed as penalties based on trumps.

and heart sequences, although the take- more likely is that the opponents have With:

auctions where the opponents bid hearts in their suit. I might not double with the pass over 4´ and wait for partner to

as 4´ is a possible final contract for your first quoted example hand above – but double again, then pass. ‘Transferable

side. make the club jack into the queen and I values’ sums up what is expected – the

Critical to these sequences is that would. Since the opponents have a real fit, cynical would say it asks partner to make

whether playing pairs or teams you want your double must be primarily take-out the last mistake.

to be able to double and describe your here. Pass with the balanced strong hand I’d expect such a double to be the

hand as frequently as possible, rather than and take your small penalty. equivalent of a hand that would expect

call. Being able to double an opening of 4™ and a double of 4´ here? I suggest removes the double. So if he has doubled

bid of 4™ to show ™K-J-9-x would leave you consider a double of 4™ as one you with extras or real shape he bids. A

you well placed, but you will never have should take out if you have a sensible borderline hand for passing out 4´

that hand. Conversely, doubling every destination in mind in the form of a one- doubled would be:

frequently, but leaves the responding hand withstanding. I’d remove a double of 4™ The 4-4-4-1 shape is not nearly as

place on the axis to have the double is This would work well enough here. As to three instead.

much closer to take-out than penalty, the double of 4´, again remove with shape, To sum up, I may be naïve in believing

precisely because the more cards in one but I’d consider the double closer to the opponents, but I play that if they get to

suit your RHO has, the fewer cards you are optional here. Vulnerable with 5-4 in the the four-level in a hurry they are probably

likely to hold. You don’t want to wait to minors and fewer than 6 points, I’d tend to right. I double, expecting partner to

double until both you and RHO have pass. Non-vulnerable with one spade (or remove if he thinks he has a reason, and

length in the same suit. three, so that I could infer real shortage only to pass if he knows it is right or if he

At the ‘minimum-shapely’ end of the opposite) and especially facing vulnerable thinks everything else is worse. r

spectrum you should double 4™ with:

At the ‘balanced, working high-cards’ THE ‘DEBATE’ TAKES A BREAK

end of the spectrum I’d happily double 4™ Our ‘Debate’ column has being going strong for over five years, but we now feel it

with: is time it took a break. It will come back when we have put together a new, strong

Partner will remove the double with a ‘Great Bridge Disasters’, by David Burn, starting in 2013.