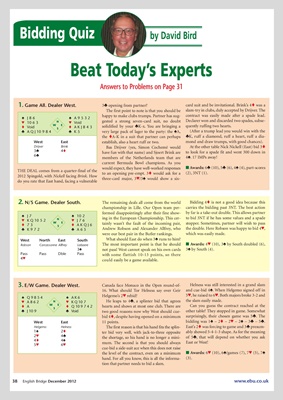 1. Game All. Dealer West. 3® opening from partner? card suit and be invitational. Brink’s 4t was a

The first point to note is that you should be slam-try in clubs, duly accepted by Drijver. The

happy to make clubs trumps. Partner has sug- contract was easily made after a spade lead.

the tA-K in a suit that partner can perhaps ®K, ruff a diamond, ruff a heart, ruff a dia-

members of the Netherlands team that are 4´. 17 IMPs away!

current Bermuda Bowl champions. As you

THE DEAL comes from a quarter-final of the

2012 Spingold, with Nickell facing Brink. How

do you rate that East hand, facing a vulnerable

2. N/S Game. Dealer South. The remaining deals all come from the world Bidding 4t is not a good idea because this

championship in Lille. Our Open team per- carries the bidding past 3NT. The best action

formed disappointingly after their fine show- by far is a take-out double. This allows partner

N ing in the European Championship. This cer- to bid 3NT if he has some values and a spade

were our best pair in the Butler rankings. which was easily made.

West North East South What should East do when 3´ runs to him?

Robson Carcassonne Allfrey Labaere The most important point is that he should n Awards: 4™ (10), 3´ by South doubled (6),

Pass Pass Dble Pass with some flattish 10-13 points, so there

4™ could easily be a game available.

16. What should Tor Helness say over Geir and cue-bid 4´. When Helgemo signed off in

W E Can you guess the contract reached at the

bid 4t, despite having opened on a minimum surprisingly, their chosen game was 5®. The

mum. The second is that you should always East or West!

cue-bid a side-suit ace when this does not raise

tion that partner needs to bid a slam.