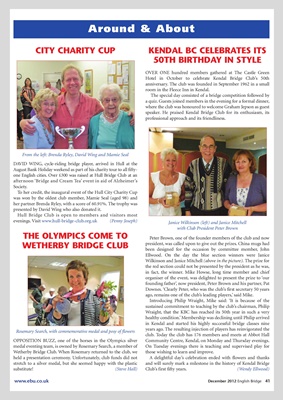 OVER ONE hundred members gathered at The Castle Green

anniversary. The club was founded in September 1962 in a small

room in the Fleece Inn in Kendal.

The special day consisted of a bridge competition followed by

a quiz. Guests joined members in the evening for a formal dinner,

where the club was honoured to welcome Graham Jepson as guest

speaker. He praised Kendal Bridge Club for its enthusiasm, its

professional approach and its friendliness.

From the left: Brenda Ryley, David Wing and Mamie Seal

DAVID WING, cycle-riding bridge player, arrived in Hull at the

one English cities. Over £300 was raised at Hull Bridge Club at an

afternoon ‘Bridge and Cream Tea’ event in aid of Alzheimer’s

To her credit, the inaugural event of the Hull City Charity Cup

was won by the oldest club member, Mamie Seal (aged 98) and

her partner Brenda Ryley, with a score of 60.91%. The trophy was

presented by David Wing who also donated it.

Hull Bridge Club is open to members and visitors most

THE OLYMPICS COME TO Peter Brown, one of the founder members of the club and now

president, was called upon to give out the prizes. China mugs had

WETHERBY BRIDGE CLUB been designed for the occasion by committee member, John

Ellwood. On the day the blue section winners were Janice

Wilkinson and Janice Mitchell (above in the picture). The prize for

the red section could not be presented by the president as he was,

organiser of the event, was delighted to present the prize to ‘our

Downes. ‘Clearly Peter, who was the club’s first secretary 50 years

ago, remains one of the club’s leading players,’ said Mike.

Introducing Philip Wraight, Mike said: ‘It is because of the

sustained commitment to teaching by the club’s chairman, Philip

Wraight, that the KBC has reached its 50th year in such a very

in Kendal and started his highly successful bridge classes nine

Rosemary Search, with commemorative medal and posy of flowers years ago. The resulting injection of players has reinvigorated the

club. Today the club has 176 members and meets at Abbot Hall

OPPOSITION BUZZ, one of the horses in the Olympics silver Community Centre, Kendal, on Monday and Thursday evenings.

medal eventing team, is owned by Rosemary Search, a member of On Tuesday evenings there is teaching and supervised play for

Wetherby Bridge Club. When Rosemary returned to the club, we those wishing to learn and improve.

held a presentation ceremony. Unfortunately, club funds did not A delightful day’s celebration ended with flowers and thanks

stretch to a silver medal, but she seemed happy with the plastic and will surely mark a milestone in the history of Kendal Bridge