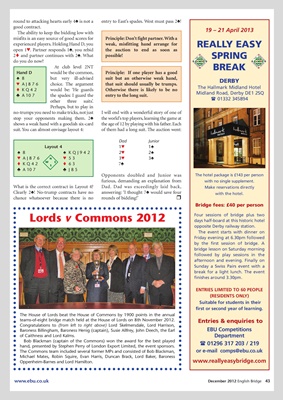 round to attacking hearts early 4´ is not a entry to East’s spades. West must pass 2´!

misfits is an easy source of good scores for Principle: Don’t fight partner. With a

the auction to end as soon as

2t and partner continues with 2´. What

do you do now?

would be the common, Principle: If one player has a good

´ 8 but very ill-advised suit but an otherwise weak hand,

™ AJ876 choice. The argument that suit should usually be trumps.

t KQ42 would be: ‘He guards Otherwise there is likely to be no The Hallmark Midland Hotel

Perhaps, but to play in

no-trumps you need to make tricks, not just I will end with a wonderful story of one of

stop your opponents making them. 2´ the world’s top players, learning the game at

shows a weak hand with a goodish six-card the age of 12 by playing with his father. Each

suit. You can almost envisage layout 4: of them had a long suit. The auction went:

furious, demanding an explanation from with no single supplement.

What is the correct contract in Layout 4? Dad. Dad was exceedingly laid back, Make reservations directly

Clearly 2´! No-trump contracts have no answering: ‘I thought 7´ would save four with the hotel.

chance whatsoever because there is no rounds of bidding!’ r

Four sessions of bridge plus two

The event starts with dinner on

by the first session of bridge. A

followed by play sessions in the

afternoon and evening. Finally on

Sunday a Swiss Pairs event with a

break for a light lunch. The event

Suitable for students in their

first or second year of learning.

teams-of-eight bridge match held at the House of Lords on 8th November 2012. Entries & enquiries to

Congratulations to (from left to right above) Lord Skelmersdale, Lord Harrison,

of Caithness and Lord Kalms. Department