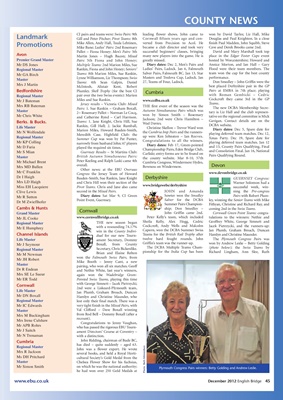 Avon Martin Jones – Hugh Bacon; Mixed many new players into the game. He is place in the Edgar Foster Cups event

Jackson; 2nd were Chris Hamilton – Gavigan. Contact details are on the

Other news: at the EBU Overseas

Clive Lewis second in the Mixed Pairs. JOHN and Amanda ning the Pre-congress

with a resounding 74.17% Cockcroft, Andy Wells and Malcolm Jacek Pietrzycki, and the runners-up:

win in the County Indivi-

Channel Islands dual for our new Tourn- Teams for the British Rail Trophy after Hamlyn and Christine Maunder.

Brian and Elaine Relton pionship for the India Cup has been Richard Lingham, Ann Slee, Ruth

won the Falmouth Swiss Pairs, from

2nd were a Liskeard-Plymouth team,

Regional Master lost only their final match. There was a

Mrs M Buckingham from Rod Bell – Dommy Boxall (after a

Mr APB Rohrs who has passed the rigorous EBU Tourn-

Mr N Trenaman with a distinction.

John was a flower expert. He wrote

Mr Simon Smith on which he was the national authority; Plymouth Congress Pairs winners: Betty Golding and Andrew Leslie.

he had won over 250 Gold Medals at