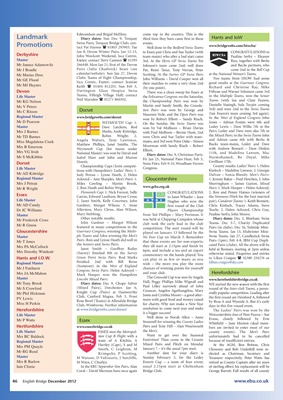 Edmondson and Brigid McElroy. come top in the country. This is the

Life Master Teams, Filleigh Village Hall; contact the Felixstowe Congress: on the Saturday, in the Multiple Teams, won the Senior

Maureen Vede, and the Open Pairs was

Regional Master www.bridgewebs.com/dorset In the West of England Congress John

Mr D Pearson WEYMOUTH Cup: 1. On the Sunday, the Swiss Teams was Jones – Adrian Fontes were 6th and

Mr TD Barnes Robin Wright; 2. were Chris and Sue Taylor with team- the Mixed Pairs; in the Swiss Teams John

Mr R Green featured in many competitions in the competition. The next round will be Pairs (in clubs). Dec 16, Yuletide Mini-

Mr T Jones Pairs. Ron and Lynne Heath did well in that these events are for non-experts; Pairs (1pm). Feb 4-8, IBM Cup Dupli-

the Seniors and Swiss Pairs. they all start at 2.15pm and finish by cated Pairs (clubs). All the above will be

Mrs PA McCulloch Janet Smith – Geoffrey Bailey 6pm, and include a tea and an expert held at Romsey, starting at 2pm unless

commentary on the hands played. You

wish – the more you play the more

(Somerset) in the West of England

chances of winning points for yourself

and your club. Herefordshire

PV Lewis the first round are Hereford A, followed

by Ross A and Wyeside A. But it’s early

days in this five-round event.

Herefordshire at www.bridgewebs.com/dorset/ resolution to come next year and make The Ladies’ Pairs was won by the

it a bigger success? Worcestershire duo of Pam Pearce – Sue

Hertfordshire www.essexbridge.co.uk Pairs and Tony Hill – Alan Wearmouth bers are invited to enter most of our

team of A Kitchin, A Festivities? Then come to the County because of insufficient entries.

Smith, C Leighton, M Chowney and Bob Underhill were re-

Mr RG Reed Krim goltz, P Scotting, Another date for your diary is elected as Chairman, Secretary and

Iain Climie In the EBU September Sim Pairs, Alan usual 2.15pm start at Cheltenham of sterling effort; his replacement will be