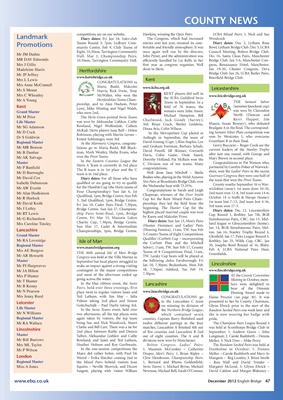 competitions are on our website. Hawkins, winning the Open Pairs. LCBA Mixed Pairs: 1. Nick and Sue

Mrs C Wheatley McWalter, who won the KENT players did well in

Mr A Young Teams in September. In a THE Samani Salver

pionship, and to Alan Hudson, Peter

Grand Master winners were John Amor, was won by Clarendon

Diana Avis, Colin Wilson. Bradgate A in the final. The correspond-

Robinson, playing with Martin Lerner – won by Westcotes 1, who overcame

Dr S Goldwin Ernest Schlesinger, were 3rd Ardingly in September, the team of

At the Marmaris Congress, congratu- Gerry Bucciero – Roger Cook are the

Mr B Dunbar man, Mark Westley, Shelia Evans, who after just one round, with George and

Master In the Eastern Counties League the Congratulations to Pat Watson who,

Herts A Team is currently in 3rd place C Division out of ten teams. Many

The B team is in 1st place and the C shire, won the Ladies’ Pairs in the recent

Boakes who, playing in the Welsh Autumn Guernsey Congress; they were one half of

Mr David Cox Diary dates: For all those who have

Isabelle Dubuisson qualified or are going to try to qualify County results: September 16 vs War-

for the Humble Cup (the Herts teams of the Wednesday heat with 73.35%.

the Corbett Plate and the Mitchell

THE 46th annual Isle of Man Bridge Teams of 8 Competitions Final, 11am,

Mr AR Howarth Congress was held at the Villa Marina in TW. Larsky Cup heats will be played at

and most of the silverware ended up 7.30pm. AT the County Committee

going across the water. Meeting in October, mem-

In the blue ribbon event, the Swiss Lancashire bers were delighted to

Mr B Kenny Pairs, held over three evenings, first hear of the Dimmie

Palmer taking 2nd place and Simon to the Lancashire C team presented to her by County Chairman,

Gottchschalk – Paul Darby taking 3rd. on winning its division of Glynn Elwick prior to the start of the

Life Master In the Swiss Teams event, held over the Northern Bridge League, Random Seeded Pairs one week later and

Mr N Williams two afternoons, all the top places were which contained seven she is now wearing her badge with

Mr RA Wallace being Sue and Nick Woodcock, Stuart twelve different pairings in the four The Champion Pairs League Round 4

Clarke and Bill Carr. There was a tie for matches. Lancashire A finished 4th out was held at Scunthorpe Bridge Club in

Master Talbot, Aleksandar Lishkov and Cathy out of eight counties. The A and B Longmuir, 2. Carole Rushforth – Dennis