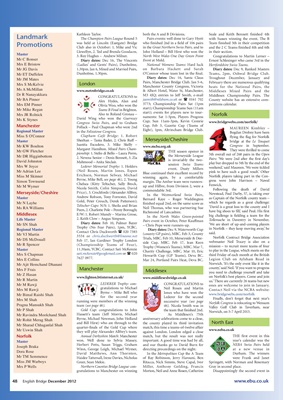 Kathleen Taylor. both the A and B Divisions. Seale and Keith Bennett finished 4th

Landmark The Champion Pairs League Round 5 Pairs events: well done to Gary Hyett with Sussex winning the event. The B

Promotions Club also in October: 1. Mike and Vic in the Great Northern Swiss Pairs, and to and the 2 C Teams finished 4th and 6th

Llewellyn, 2. Ted and Brenda Goodacre, John Holland – Bill Hirst who won the in their section.

Regional Master in the Felixstowe Congress. Bogdan Drobny have been

Margaret Hamilton. Mixed Pairs Cham- They were thrilled to come

David Johnston is invariably the two-

Mahmood – Anita Sinclair. play but dropped to 5th by the end of the

Mr Adrian Lee (Neil Rosen, Martin Jones, Espen pink to have such a good result.’ Other

Blue continued their excellent record by

winning again, by a comfortable

Mr M Wymer up and Hilbre, from Division 2, were a

In the Westmorland Swiss Pairs, Newstead, Paul Darby, 57, is taking over

finished equal 2nd, on the same score as

Teltscher Cups: N/S: 1. Sheila and Brian ‘David is a great loss to the county and I

Neil Thomas, who was partnering Sue

Richmond of Lancashire. have big shoes to fill,’ said Paul. His first

Trophy (No Fear Pairs), 1pm, YCBC. in Norfolk – they keep moving away,’ he

Master 11.30am, YCBC. Contact Sati McKenzie to play in the League, which meets on the

Mrs S Chapman sati.mckenzie@googlemail.com or ( 020 third Friday of each month at the British

Mr Ajit Hemchand Dhanani Norwich. ‘It’s the only event like it in the

Middlesex you need to challenge yourself and take

Mr R Martin us.’ There are currently 26 teams but new

Mr M Rawji LEDERER Trophy: con- CONGRATULATIONS to ones are welcome to join in January.

Byrne – Mike Bell who Jones who have won the www.bridgewebs.com/norfolk

quarter-finals of the Gold Cup where match, this time a teams-of-twelve affair

they will play Alexander Allfrey’s team. against London. London edged a close

Norfolk Annual Derbyshire Match: Manchester match, but the result was not really THE first event in this

Master won. Well done to Sylvia Massey, important. A good time was had by all, year’s calendar was the

Winn, George Leigh, Michael Wymer, directing proceedings on the night. at a new venue in

Dora Rose David Matthews, Ann Thornton, In the Metropolitan Cup the A Team Durham. The winners

gratulations to Manchester on winning Morton, Neil and Anne Rosen, Catherine Disappointingly the second event in