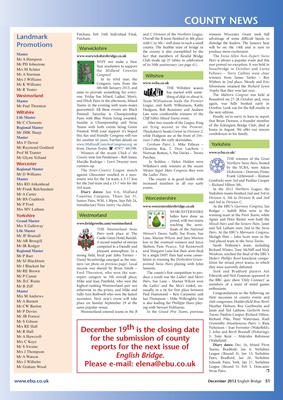 Landmark Patcham. Overall the B team finished in 4th place advantage of some difficult hands to

with C in 5th – well done to such a small dislodge the leaders. The January heat

Promotions Warwickshire county. The healthy state of bridge in will be on the 14th and is sure to

the county is also exemplified by the produce more excitement.

WHY not make a New

Mr PD Johnstone Year resolution to support of its 50th anniversary (see page 41). year proved no exception. It was held in

Mrs J Williams In its 63rd year, the

Congress runs from the www.wcba.co.uk Withers in 2nd place. Wendy and Eric

aims to provide something for every- has started with some- Trophy that they won last year.

Westmorland one. Friday has Mixed, Ladies’, Men’s, thing of déjà vu about it. The Malvern Congress was held at

Master and Flitch Pairs in the afternoon, Mixed Team Williamson leads the Premier Bransford on 27-28 October and, once

Teams in the evening with team-mates League, and Keith Williamson, Kathy again, was fully booked early in

Mr Paul Thornton October. Look out for the full results in

guaranteed. All these events are Black Hodgson, Bob Bannister and Andrew

Wiltshire Pointed. Saturday is Championship Law were comfortable winners of the the next edition.

Mr C Clements Sunday is Championship and Swiss After two rounds of the League, King that Brian Dawson, a founder member

Teams with both events being Green are lying second in the Premier, of the Eckington Bridge Club, died at

Pointed. With your support it’s hoped Thackaberry heads Gwyer in Division 2, home in August. We offer our sincere

for another 62 years. Further details on ision 3 after the early skirmishes.

Worcester runners-up. Wiltshire’s only winners at the recent

Regional Master by the YCBA, were Adam

Master imum win for the 1st team, a 3-17 loss The county is in good health with Gembicki were 3rd and Pauline Cooper

Mrs RD Aitkenhead for the 2nd team and a 13-7 win for the increased numbers in all our early – Richard Hilton 5th.

Mr BS Craddock Worcestershire Division A, 5th in Division B, and 2nd

Mrs MV Latham Rodger – Judith Biles were in the

Yorkshire Westmorland ladies have done us winning team in the Pivot Teams, while

Grand Master proud, with two teams Agnes and Peter Baxter won both the

Mr AR Brosgill A record number of entries lost to the eventual winners and Joyce 2nd-placed team in the Swiss Teams.

strong field, local pair John Farmer – by a single IMP! Pam had some conso- Woolven, reached the final of the EBU’s

Mr SJ Blackburn tition for mixed pivot teams, in which

Mr RE Brown Fred Thornton, who won the non- The county’s first competition to pro- York and Bradford players Ant

Mr P Camm expert category in 5th overall place; duce a result was the Ladies’ and Men’s Edwards and Neil Zussman appeared in

highest-ranking Westmorland pair not the Ladies’ and the Men’s ended, un- members of a team of mind games

otherwise in the prizes, and Mike and usually, in a tie for first place between enthusiasts.

Master Congratulations to the following on

Mrs M Andrews their successes in county events and

December 19th is the closing date

for the submission of county (Wakefield)

reports for the next issue of Teams, Bradford. Jan 6, Yorkshire