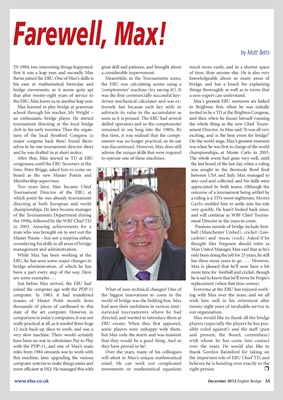 IN 1984, two interesting things happened: great skill and patience, and brought about much more easily, and in a shorter space

first it was a leap year, and secondly Max a considerable improvement. of time, than anyone else. He is also very

Bavin joined the EBU. One of Max’s skills is Meanwhile, in the Tournaments scene, knowledgeable about so many areas of

his ease at mathematical formulae and the EBU was calculating scores using a bridge, and has a knack for explaining

bridge movements, so it seems quite apt ‘comptometer’ machine (try saying it!). It things thoroughly as well as in terms that

that after twenty-eight years of service to was the first commercially successful key- a non-expert can understand.

the EBU, Max leaves us in another leap year. driven mechanical calculator and was ex- Max’s greatest EBU moments are linked

Max learned to play bridge at grammar tremely fast because each key adds or to Brighton: first, when he was initially

school through his teacher, Mr Wright – subtracts its value to the accumulator as invited to be a TD at the Brighton Congress,

an enthusiastic bridge player. He started soon as it is pressed. The EBU had several and then when he found himself running

club in his early twenties. Then the organ- remained in use long into the 1980s. By ament Director. As Max said: ‘It was all very

isers of the local Stratford Congress (a this time, it was realised that the compt- exciting, and is the best event for bridge!’

major congress back then) found them- ometer was no longer practical, so its use On the world stage, Max’s greatest moment

selves to be one tournament director short was discontinued. However, Max does still was when he was first in charge of the world

and he was drafted in at short notice. admire the unique skills that were required championships, at Monte Carlo in 2003.

After that, Max started to TD at EBU to operate one of these machines. The whole event had gone very well, until

congresses, until the EBU Secretary at the the last board of the last day, when a ruling

time, Peter Briggs, asked him to come on was sought in the Bermuda Bowl final

board as the new Master Points and between USA and Italy. Max managed to

Membership supervisor. stay cool and collected, and his skills were

Two years later, Max became Chief appreciated by both teams. Although the

Tournament Director of the EBU, at outcome of a tournament being settled by

which point he was already tournament a ruling is a TD’s worst nightmare, Monte

championships. He later became manager very quickly. He hasn’t looked back since,

the 1990s, followed by the WBF Chief TD ment Director in the years to come.

in 2003. Amazing achievements for a Passions outside of bridge include foot-

man who was brought on to sort out the ball (Manchester United), cricket (Lan-

Master Points – but not a surprise either, cashire) and music (rock). Asked if he

While Max has been working at the only been doing the job for 25 years, he still

EBU, he has seen some major changes to has three more years to go . . . However,

bridge administration, of which he has Max is pleased that he’ll now have a bit

been a part every step of the way. Here more time for football and cricket, though

are some examples . . . he is sad to know that he’ll never be Fergie’s

Just before Max arrived, the EBU had replacement (when that time comes).

joined the computer age with the PDP-11 What of non-technical changes? One of Everyone at the EBU has enjoyed work-

computer. In 1983, it had transferred the biggest innovations to come to the ing with Max over the years, and we all

masses of Master Point records from world of bridge was the bidding box. Max wish him well in his retirement after

state of the art computer. However, in national tournaments where he had our organisation.

comparison to today’s computers, it was not directed, and wanted to introduce them at Max would like to thank all the bridge

really practical at all, as it needed three huge EBU events. When they first appeared, players (especially the players he has pos-

12 inch back-up discs to work, and was a some players were unhappy with them, sibly ruled against!) and the staff (past

very slow machine. There would certainly but Max rode the storm and was insistent and present, the Board, committees)

have been no way to administer Pay to Play that they would be a good thing. And so with whom he has come into contact

with the PDP-11, and one of Max’s main they have proved to be! over the years. He would also like to

roles from 1984 onwards was to work with Over the years, many of his colleagues thank Gordon Rainsford for taking on

this machine, later upgrading the various will attest to Max’s unique mathematical the impor tant role of EBU Chief TD, and

computer systems to make things easier and mind. He can work out complicated believes he is handing over exactly to the

more efficient at HQ. He managed this with movements or mathematical equations right person. r