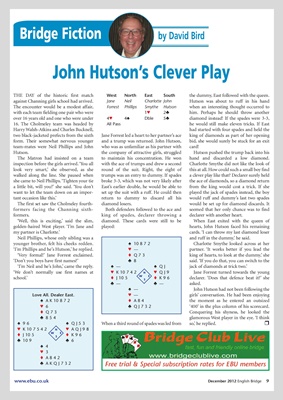 THE DAY of the historic first match West North East South the dummy, East followed with the queen.

against Channing girls school had arrived. Jane Neil Charlotte John Hutson was about to ruff in his hand

The encounter would be a modest affair, Forrest Phillips Smythe Hutson when an interesting thought occurred to

with each team fielding one pair who were 1™ 2® him. Perhaps he should throw another

16. The Cholmeley team was headed by All Pass he would still make eleven tricks. If East

Harry Walsh-Atkins and Charles Bucknell, had started with four spades and held the

form. Their somewhat nervous younger and a trump was returned. John Hutson, bid, she would surely be stuck for an exit

team-mates were Neil Phillips and John who was as unfamiliar as his partner with card!

Hutson. the company of attractive girls, struggled Hutson pushed the trump back into his

The Matron had insisted on a team to maintain his concentration. He won hand and discarded a low diamond.

inspection before the girls arrived. ‘You all with the ace of trumps and drew a second Charlotte Smythe did not like the look of

look very smart,’ she observed, as she round of the suit. Right, the eight of this at all. How could such a small boy find

walked along the line. She paused when trumps was an entry to dummy. If spades a clever play like that? Declarer surely held

she came to Neil Phillips. ‘Tighten your tie broke 3-3, which was not very likely after the ace of diamonds, so a diamond return

a little bit, will you?’ she said. ‘You don’t East’s earlier double, he would be able to from the king would cost a trick. If she

want to let the team down on an impor- set up the suit with a ruff. He could then played the jack of spades instead, the boy

tant occasion like this.’ return to dummy to discard all his would ruff and dummy’s last two spades

The first set saw the Cholmeley fourth- diamond losers. would be set up for diamond discards. It

formers. king of spades, declarer throwing a declarer with another heart.

‘Well, this is exciting,’ said the slim, diamond. These cards were still to be When East exited with the queen of

my partner is Charlotte.’ cards. ‘I can throw my last diamond loser

Neil Phillips, whose only sibling was a and ruff in the dummy,’ he said.

younger brother, felt his cheeks redden. ´ 10 8 7 2 Charlotte Smythe looked across at her

‘I’m Phillips and he’s Hutson,’ he replied. ™ — partner. ‘It works better if you lead the

‘Very formal!’ Jane Forrest exclaimed. t Q73 king of hearts, to look at the dummy,’ she

´ — John Hutson had not been following the

Love All. Dealer East. ™ — girls’ conversation. He had been enjoying

t Q73 Conquering his shyness, he looked the