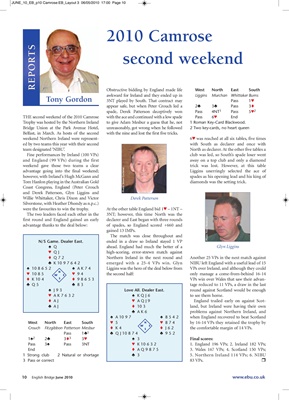 Tony Gordon 3NT played by South. That contract may Pass 1™

Trophy was hosted by the Northern Ireland to give Adam Mesbur a guess that he, not 1 Roman Key-Card Blackwood.

Bridge Union at the Park Avenue Hotel, unreasonably, got wrong when he followed 2 Two key-cards, no heart queen

Belfast, in March. As hosts of the second with the nine and lost the first five tricks.

weekend Northern Ireland were represent- 6™ was reached at all six tables, five times

team designated ‘NIBU’. North as declarer. At the other five tables a

weekend gave those two teams a clear trick was lost. However, at this table

advantage going into the final weekend; Liggins unerringly selected the ace of

however, with Ireland’s Hugh McGann and spades as his opening lead and his king of

Tom Hanlon playing in the Australian Gold diamonds was the setting trick.

and Derek Patterson, Glyn Liggins and

Silverstone, with Heather Dhondy as n.p.c.)

were the favourites to win the trophy. At the other table England bid 1™ – 1NT –

The two leaders faced each other in the 3NT; however, this time North was the

advantage thanks to the deal below: of spades, so England scored +660 and

The match was close throughout and

´ Q ahead. England had much the better of a Glyn Liggins

´ J93 Love All. Dealer East. round against Scotland would be enough

® AK6 problems against Northern Ireland, and