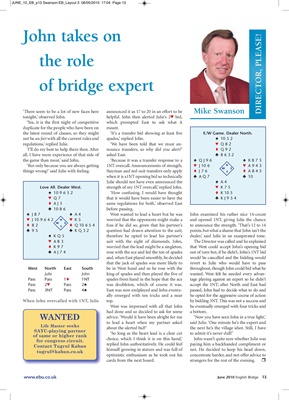 ‘Yes, it is the first night of competitive which prompted East to ask what it

duplicate for the people who have been on meant.

the latest round of classes, so they might ‘It’s a transfer bid showing at least five E/W Game. Dealer North.

regulations,’ replied Julie. ‘We have been told that we must an- ™ Q82

‘I’ll do my best to help them then. After nounce transfers, so why did you alert?’ t Q92

Julie should not have even announced the ´ A4

® 95 ® KQ32 question had drawn attention to the suit; points, but what a shame that John isn’t the

´ KQ5 therefore he opted to lead his partner’s dealer,’ said Julie in an exasperated tone.

™ A83 suit with the eight of diamonds. John, The Director was called and he explained

t K97 worried that the lead might be a singleton, that West could accept John’s opening bid

and, when East played smoothly, he decided would be cancelled and the bidding would

West North East South be in West hand and so he rose with the throughout, though John could bid what he

Julie John king of spades and then played the five of wanted. West felt he needed every advan-

Pass 2™ Pass 2´ was doubleton, which of course it was. accept the 1NT; after North and East had

Pass 3NT Pass 4´ East was now endplayed and John eventu- passed, John had to decide what to do and

When John overcalled with 1NT, Julie top. by bidding 3NT. This was not a success and

had done and so decided to ask for some a bottom.

WANTED advice. ‘Would it have been alright for me

to lead a heart when my partner asked

‘Now you have seen John in a true light,’

said Julie. ‘One minute he’s the expert and

Life Master seeks about the alerted bid?’ the next he’s the village idiot. Still, I have

‘So long as the heart lead is a clear cut to admit it’s never dull!’

of same or higher rank

for congress circuit. choice, which I think it is on this hand,’ John wasn’t quite sure whether Julie was

Contact Tugrul Kaban replied John authoritatively. He could feel paying him a backhanded compliment or

tugrul@kaban.co.uk himself growing in stature and was full of not. He decided to keep his head down,

optimistic enthusiasm as he took out his concentrate harder, and not offer advice to

cards from the next board. strangers for the rest of the evening. r