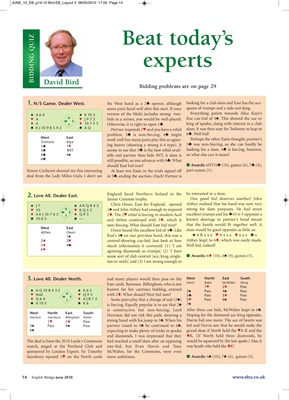 1. N/S Game. Dealer West. the West hand as a 2® opener, although looking for a club slam and East has the ace-

some pairs fared well after this start. If your queen of trumps and a side-suit king.

work well but many pairs play this as agree-

6® still possible, so you advance with 4®. What

Simon Cochemé showed me this interesting At least two Easts in the trials signed off part-scores (1).

deal from the Lady Milne trials. I don’t see in 5®, ending the auction. Ouch! Partner is

England faced Northern Ireland in the be interested in a slam.

2. Love All. Dealer East. One good bid deserves another! John

non-forcing. What should East bid next? that the hands would fit together well. A

Owen found the excellent bid of 4®. Like slam would be good opposite as little as:

2t 2™ control-showing cue-bid. Just look at how Atthey leapt to 6t, which was easily made.

3. Love All. Dealer North. and many players would then pass on the West North East South

East cards. Baroness Billingham, who is not

N with 2t. What should West bid now?

is constructive but non-forcing. Lord After three cue bids, McWalter leapt to 6´.

Harrison did not risk this path, showing a Hoping for the diamond ace-king opposite,

1™ 2t Pass strong hand with his jump to 3´. When his Harris bid one more. The ace of hearts was

3´ Pass 4´ Pass partner raised to 4´ he continued to 6´, led and Harris saw that he would make the

and diamonds. I was impressed that they tK. (If North held three diamonds, he

The deal is from the 2010 Lords v Commons had reached a small slam after an opposing would be squeezed by the last spade.) Alas, it

match, staged at the Portland Club and one-bid, but Evan Harris and Tony was South who held the tK!

sponsored by London Export. Sir Timothy McWalter, for the Commons, were even