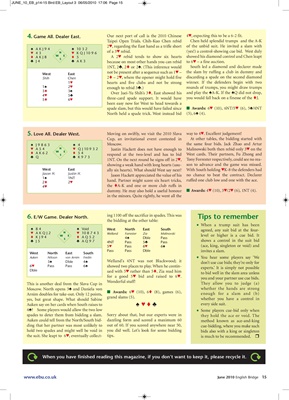 2™, regarding the East hand as a trifle short of the unbid suit. He invited a slam with

Shih Chen 2t – 2™, where the opener might hold five discarding a spade on the second diamond

1™ hearts and five clubs and not be strong winner. If the defenders begin with two

5t 6™ three-card spade support. It would have you would fall back on a finesse of the tJ.

been easy now for West to head towards a

5. Love All. Dealer West. Moving on swiftly, we visit the 2010 Slava way to 4™. Excellent judgement!

Cup, an invitational event contested in At other tables, the bidding started with

t 54 respond at the two-level and has to bid West cards. Their partners, Fu Zhong and

1NT. On the next round he signs off in 2™, Tony Forrester respectively, could see no rea-

showing a weak hand with long hearts (usu- son to advance and the game was missed.

West East ally six hearts). What should West say next? With South holding ™K-8 the defenders had

Jason H. Justin H. Jason Hackett appreciated the value of his no chance to beat the contract. Declarer

2t 2™ hand. Partner might score six heart tricks, ruffed one club low and one with the ace.

4™ the tA-K and one or more club ruffs in

in the minors. Quite rightly, he went all the

ing 1100 off the sacrifice in spades. This was

the bidding at the other table:

• When aany suit bid at has four-

4´ Welland’s 4NT was not Blackwood; it

6™ Pass Pass 6´ showed two places to play. When he contin- experts.’ It is simply not possible

Dble ued with 5™ rather than 5t, Zia read him to bid well in the slam area unless

for a good 5™ bid and raised to 6™. you and your partner use cue bids.

Wonderful stuff! They allow you to judge (a)

This is another deal from the Slava Cup in

Moscow. North opens 3´ and Daniela von whether the hands are strong

Arnim doubles for take-out. Only 12 points,

grand slams (5). whether you have a control in

yes, but great shape. What should Sabine

Auken say on her cards when South raises to ´ ™t® every side suit.

4´? Some players would allow the two low

spades to deter them from bidding a slam. Sorry about that, but our experts were in

ace or void. The

ding that her partner was most unlikely to out of 60. If you scored anywhere near 50, cue-bidding, where you make such

hold two spades and might well be void in you did well. Let’s look for some bidding bids also with a king or singleton

the suit. She leapt to 6™, eventually collect- tips. is much to be recommended. r

When you have finished reading this magazine, if you don’t want to keep it, please recycle it.