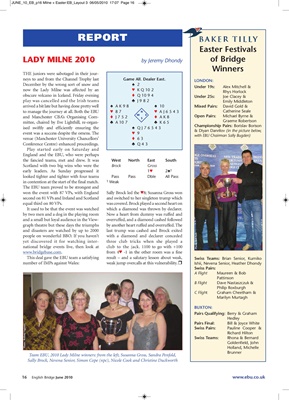 THE juniors were sabotaged in their jour-

neys to and from the Channel Trophy last Game All. Dealer East. LONDON:

December by the wrong sort of snow and ´ 2

play was cancelled and the Irish teams ® J982 Emily Middleton

& Diyan Danrilov (in the picture below,

event was a success despite the omens. The ™ 9

Play started early on Saturday and

England and the EBU, who were perhaps

the fancied teams, met and drew. It was West North East South

Scotland with two big wins who were the Brock Gross

early leaders. As Sunday progressed it 1™ 2´1

in contention at the start of the final match. 1 Weak

The EBU team proved to be strongest and

equal third on 80 VPs. was covered. Brock played a second heart on

It used to be that the event was watched which a diamond was thrown by declarer.

and a small but loyal audience in the View- overruffed, and a diamond cashed followed

graph theatre but these days the triumphs by another heart ruffed and overruffed. The

people on wonderful BBO. If you haven’t with a diamond and declarer conceded

www.bridgebase.com. from 4™ -1 in the other room was a fine

This deal gave the EBU team a satisfying result – and a salutary lesson about weak, Swiss Teams: Brian Senior, Kumiko