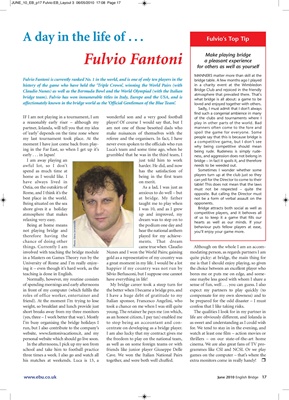 for others as well as yourself

MANNERS matter more than skill at the

Fulvio Fantoni is currently ranked No. 1 in the world, and is one of only ten players in the bridge table. A few months ago I played

history of the game who have held the ‘Triple Crown’, winning the World Pairs (with in a charity event at the Wimbledon

atmosphere that prevailed there. That’s

bridge team). Fulvio has won innumerable titles in Italy, Europe and the USA, and is what bridge is all about: a game to be

affectionately known in the bridge world as the ‘Official Gentleman of the Blue Team’. loved and enjoyed together with others.

Sadly, I must admit that I don’t always

find such a congenial ambience in many

IF I am not playing in a tournament, I am wonderful son and a very good football of the clubs and tournaments where I

a reasonably early riser – although my player! Of course I would say that, but I play in other parts of the world. Bad

partner, Iolanda, will tell you that my idea am not one of those besotted dads who manners often come to the fore and

of ‘early’ depends on the time zone where make nuisances of themselves with the spoil the game for everyone. Some

my last tournament took place. At the referee and the organisers. In fact, I have people say that this is because bridge is

a competitive game, but I don’t see

why being competitive should mean

ing in the Far East, so when I get up it’s Luca’s team and some time ago, when he being rude. Rudeness is simply rude-

early . . . in Japan! grumbled that he was in the third team, I ness, and aggression does not belong in

I am away playing an just told him to work bridge – in fact it spoils it, and therefore

awful lot, so I don’t harder. He did, and now needs to be weeded out.

home as I would like. I being in the first team players turn up at the club just so they

can yell for the Director to come to their

have always lived in on merit.

table! This does not mean that the laws

Ostia, on the outskirts of As a lad, I was just as must not be respected – quite the

Rome, and I think it’s the anxious to do well – but opposite. But calling the Director must

best place in the world. at bridge. My father not be a form of verbal assault on the

Being situated on the sea taught me to play when opponents.

shore gives it a holiday I was 10, and as I grew Bridge attracts both social as well as

atmosphere that makes up and improved, my competitive players, and it behoves all

of us to keep it a game that fills our

relaxing very easy. dream was to step on to

hearts as well as our minds. If your

Being at home means the podium one day and behaviour puts fellow players at ease,

not playing bridge and hear the national anthem you’ll enjoy your game more.

therefore having the played for my achieve-

chance of doing other ments. That dream

things. Currently I am came true when Claudio Although on the whole I am an accom-

involved with teaching the bridge module Nunes and I won the World Pairs; gaining modating person, as regards partners I am

in a Masters on Games Theory run by the gold as a representative of my country was quite picky: at bridge, the main thing for

University of Rome and I’m really enjoy- a great moment in my life. I would be a lot me is that I should enjoy playing, so given

ing it – even though it’s hard work, as the happier if my country was not run by the choice between an excellent player who

teaching is done in English. Silvio Berlusconi, but I suppose one cannot bores me or puts me on edge, and some-

Normally, however, my routine consists have everything in life! one maybe less good with whom I share a

of spending mornings and early afternoons My bridge career took a steep turn for sense of fun, well . . . you can guess. I also

in front of my computer (which fulfils the the better when I became a bridge pro, and expect my partners to play quickly (to

roles of office worker, entertainer and I have a huge debt of gratitude to my compensate for my own slowness) and to

friend). At the moment I’m trying to lose Italian sponsor, Francesco Angelini, who be prepared for the odd disaster – I must

weight, so breakfast and lunch provide just took a chance on me when I was still quite confess that I like taking risks.

short breaks away from my three monitors young. The retainer he pays me (on which, The qualities I look for in my partner in

(yes, three – I work better that way). Mostly as an honest citizen, I pay tax) enabled me life are obviously different, and Iolanda is

run, but I also contribute to the company’s cen trate on developing as a bridge player. for. We tend to stay in in the evening, and

website, www.fantonivacations.it, and my I am also lucky that my contract gives me watch at least one film – action movies or

personal website which should go live soon. the freedom to play on the national team, thrillers – on our state-of-the-art home

In the afternoons, I pick up my son from as well as on some foreign teams or with cinema. We are also great fans of TV pro-

school and take him to football practice friends like junior player Giuseppe Delle grammes like CSI and NCSI. Or we play

three times a week. I also go and watch all Cave. We won the Italian National Pairs games on the computer – that’s where the

his matches at weekends. Luca is 13, a together, and were both well chuffed. extra monitors come in really handy! r