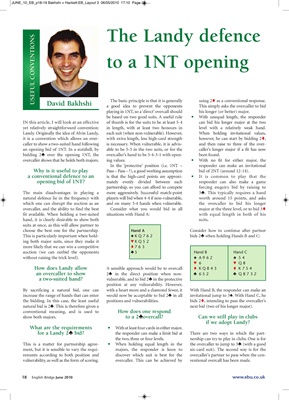 to a 1NT opening

The basic principle is that it is generally using 2t as a conventional response.

playing in 1NT, so a ‘direct’ overcall should his longer (or better) major.

be based on two good suits. A useful rule • With unequal length, the responder

IN this article, I will look at an effective of thumb is for the suits to be at least 5-4 can bid his longer major at the two

yet relatively straightforward convention: in length, with at least two honours in level with a relatively weak hand.

Landy. Originally the idea of Alvin Landy, each suit (when non-vulnerable). However, When holding invitational values,

it is a convention which allows an over- with extra length, less high-card strength however, he can start by bidding 2t,

caller to show a two-suited hand following is necessary. When vulnerable, it is advis- and then raise to three of the over-

an opening bid of 1NT. In a nutshell, by able to be 5-5 in the two suits, or for the caller’s longer major if a fit has now

overcaller shows that he holds both majors. ing values. • With no fit for either major, the

In the ‘protective’ position (i.e. 1NT – responder can make an invitational

opening bid of 1NT? mately evenly divided between each responder can also make a game

partnership, so you can afford to compete forcing enquiry bid by raising to

The main disadvantages in playing a more aggressively. Successful match-point 3®. This typically requires a hand

natural defence lie in the frequency with players will bid when 4-4 if non-vulnerable, worth around 15 points, and asks

which one can disrupt the auction as an and on many 5-4 hands when vulnerable. the overcaller to bid his longer

overcaller, and the ability to find the best Consider what you would bid in all major at the three level, or to bid 3t

fit available. When holding a two-suited situations with Hand A: with equal length in both of his

hand, it is clearly desirable to show both suits.

suits at once, as this will allow partner to

choose the best one for the partnership. Hand A Consider how to continue after partner

This is particularly important when hold- ´KQ762 bids 2® when holding Hands B and C:

ing both major suits, since they make it ™KQ52

more likely that we can win a competitive t763

auction (we can outbid the opponents ®5 Hand B Hand C

a two-suited hand? vulnerable, and to bid 2® in the protective

position at any vulnerability. However,

By sacrificing a natural bid, one can with a heart more and a diamond fewer, it With Hand B, the responder can make an

increase the range of hands that can enter would now be acceptable to bid 2® in all invitational jump to 3´. With Hand C, he

the bidding. In this case, the least useful positions and vulnerabilities. bids 2t, intending to pass the overcaller’s

natural bid is 2®. This is therefore given a next bid (two of his longer major).

conventional meaning, and is used to How does one respond

show both majors. to a 2®overcall? Can we still play in clubs

if we adopt Landy?

What are the requirements • With at least four cards in either major,

for a Landy 2® bid? the responder can make a limit bid at There are two ways in which the part-

the two, three or four levels. nership can try to play in clubs. One is for

ment, but it is sensible to vary the requi- majors, the responder is keen to six-card suit). The second way is for the

vulnerability, as well as the form of scoring. overcaller. This can be achieved by ventional overcall has been made.