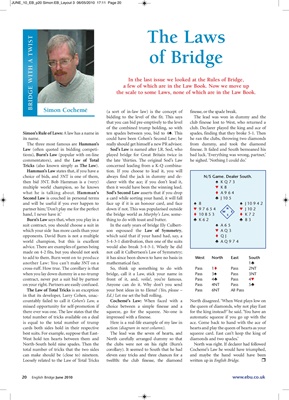 In the last issue we looked at the Rules of Bridge,

a few of which are in the Law Book. Now we move up

the scale to some Laws, none of which are in the Law Book.

Simon Cochemé (a sort of in-law law) is the concept of finesse, or the spade break.

bidding to the level of the fit. This says The lead was won in dummy and the

that you can bid pre-emptively to the level club finesse lost to West, who returned a

of the combined trump holding, so with club. Declarer played the king and ace of

Simon’s Rule of Laws: A law has a name in ten spades between you, bid to 4´. This spades, finding that they broke 5-1. Then

its name. could have been Cohen’s Second Law; he he ran the clubs, throwing two diamonds

The three most famous are Hamman’s really should get himself a new PR advisor. from dummy, and took the diamond

Law (often quoted in bidding competi- Sod’s Law is named after J.R. Sod, who finesse. It failed and South bemoaned his

commentators), and the Law of Total the late ’thirties. The original Sod’s Law he sighed. ‘Nothing I could do.’

Tricks (also known simply as The Law). concerned leading from a K-Q combina-

Hamman’s Law states that, if you have a tion. If you choose to lead it, you will

choice of bids, and 3NT is one of them, always find the jack in dummy and de- N/S Game. Dealer South.

multiple world champion, so he knows then it would have been the winning lead. ™ K8

what he is talking about. Hamman’s Sod’s Second Law asserts that if you drop t A964

Second Law is couched in personal terms a card while sorting your hand, it will fall ® J 10 5

suit contract, you should choose a suit in In the early years of bridge Ely Culbert- ´ A65

which your side has more cards than your son espoused the Law of Symmetry, ™ AQ3

opponents. David Burn is not a multiple which said that if your hand had, say, a t QJ

advice. There are examples of games being would also break 5-4-3-1. Wisely he did

made on 4-2 fits, but you should not seek not call it Culbertson’s Law of Symmetry;

to add to them. Burn went on to produce it has since been shown to have no basis in West North East South

another Law: You can’t make 3NT on a mathematical fact. 1®

cross-ruff. How true. The corollary is that So, think up something to do with Pass 1t Pass 2NT

when you lay down dummy in a no-trump bridge, call it a Law, stick your name in Pass 3´ Pass 3NT

on your right. Partners are easily confused. Anyone can do it. Why don’t you send Pass 4NT Pass 5®

The Law of Total Tricks is an exception your best ideas in to Elena? (Yes, please – Pass 6NT All Pass

in that its developer, Larry Cohen, unac- Ed.) Let me set the ball rolling.

countably failed to call it Cohen’s Law, a Cochemé’s Law: When faced with a North disagreed. ‘When West plays low on

missed opportunity for self-promotion if choice between a simple finesse and a the queen of diamonds, why not play East

there ever was one. The law states that the squeeze, go for the squeeze. No-one is for the king instead?’ he said. ‘You have an

total number of tricks available on a deal impressed with a finesse. automatic squeeze if you go up with the

is equal to the total number of trump Here is a real-life example of my law in ace. Come back to hand with the ace of

cards both sides hold in their respective action (diagram in next column). hearts and play the queen of hearts as your

best suits. For example, suppose that East- The lead was the seven of hearts, and squeeze card. East can’t keep the king of

West hold ten hearts between them and North carefully arranged dummy so that diamonds and two spades.’

North-South hold nine spades. Then the the clubs were not on his right (Burn’s North was right. If declarer had followed

total number of tricks that the two sides corollary). It seemed to South that he had Cochemé’s Law he would have triumphed,

can make should be (close to) nineteen. eleven easy tricks and three chances for a and maybe the hand would have been

Loosely related to the Law of Total Tricks twelfth: the club finesse, the diamond written up in English Bridge. r