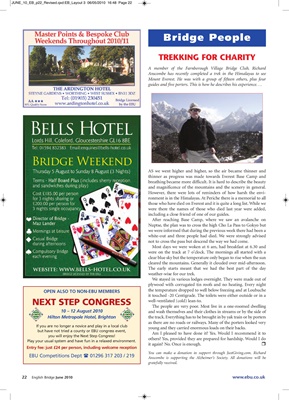 A member of the Farnborough Village Bridge Club, Richard

Anscombe has recently completed a trek in the Himalayas to see

Mount Everest. He was with a group of fifteen others, plus four

guides and five porters. This is how he describes his experience. . .

AS we went higher and higher, so the air became thinner and

thinner as progress was made towards Everest Base Camp and

breathing became more difficult. It is hard to describe the beauty

and magnificence of the mountains and the scenery in general.

However, there were lots of reminders of how harsh the envi-

ronment is in the Himalayas. At Periche there is a memorial to all

those who have died on Everest and it is quite a long list. While we

were there the names of those who died last year were added,

including a close friend of one of our guides.

After reaching Base Camp, where we saw an avalanche on

Nuptse, the plan was to cross the high Cho La Pass to Gokyo but

white-out and three people had died. We were strongly advised

not to cross the pass but descend the way we had come.

were on the track at 7 o’clock. The mornings all started with a

cleared the mountains. Generally it clouded over mid-afternoon.

weather-wise for our trek.

We stayed in various lodges overnight. They were made out of

plywood with corrugated tin roofs and no heating. Every night

it touched -20 Centigrade. The toilets were either outside or in a

The people are very poor. Most live in a one-roomed dwelling

Hilton Metropole Hotel, Brighton the track. Everything has to be brought in by yak train or by porters

as there are no roads or railways. Many of the porters looked very

young and they carried enormous loads on their backs.

but have not tried a county or EBU congress event,

Am I pleased to have done it? Yes. Would I recommend it to

you will enjoy the Next Step Congress!

Play your usual system and have fun in a relaxed environment.

others? Yes, provided they are prepared for hardship. Would I do

it again? No. Once is enough. r

You can make a donation in support through JustGiving.com. Richard