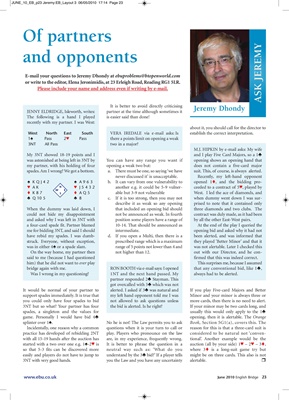 It is better to avoid directly criticising

JENNY ELDRIDGE, Isleworth, writes: partner at the time although sometimes it Jeremy Dhondy

The following is a hand I played is easier said than done!

recently with my partner. I was West:

about it, you should call for the director to

3NT All Pass two in a major?

my partner, with his holding of four opening a weak two but: does not contain a five-card major

spades. Am I wrong? We got a bottom. a. There must be one, so saying ‘we have suit. This, of course, is always alerted.

never discussed it’ is unacceptable. Recently, my left-hand opponent

When the dummy was laid down, I that included an opening bid should three diamonds and two clubs. The

could not hide my disappointment not be announced as weak. In fourth contract was duly made, as it had been

and asked why I was left in 3NT with position some players have a range of by all the other East-West pairs.

a four-card spade fit. Partner blamed 10-14. That should be announced as At the end of the play I queried the

me for bidding 3NT, and said I should intermediate. opening bid and asked why it had not

have rebid my spades. I was dumb- d. If you open a Multi, then there is a been alerted, and was informed that

struck. Everyone, without exception, prescribed range which is a maximum they played 'Better Minor' and that it

was in either 4´ or a spade slam. range of 5 points not lower than 4 and was not alertable. Later I checked this

On the way home, my partner then not higher than 12. out with our Director, and he con-

said to me (because I had questioned firmed that this was indeed correct.

him) that he did not want to ever play This surprises me, because I assumed

bridge again with me. RON BOOTH via e-mail says: I opened that any conventional bid, like 1®,

Was I wrong in my questioning? 1NT and the next hand passed. My always had to be alerted.

got overcalled with 3® which was not

It would be normal of your partner to alerted. I asked if 3® was natural and If you play Five-card Majors and Better

support spades immediately. It is true that my left hand opponent told me I was Minor and your minor is always three or

you could only have four spades to bid not allowed to ask questions unless more cards, then there is no need to alert.

3NT but so what? Your partner has four the bid is alerted. Is he right? If your minor may be two cards long, and

spades, a singleton and the values for usually this would only apply to the 1®

game. Personally I would have bid 4® opening, then it is alertable. The Orange

splinter over 1´. No he is not! The Law permits you to ask Book, Section 5G1(a), covers this. The

Incidentally, one reason why a common questions when it is your turn to call or reason for this is that a three-card suit is

practice has developed of rebidding 2NT play. Players who pronounce on the law considered to be natural not ‘conven -

with all 15-19 hands after the auction has are, in my experience, frequently wrong. tional’. Another example would be the

so that 5-3 fits can be discovered more neutral way such as: ‘What do you where 3t is a long-suit game try but

easily and players do not have to jump to understand by the 3® bid?’ If a player tells might be on three cards. This also is not

3NT with very good hands. you the Law and you have any uncertainty alertable. r