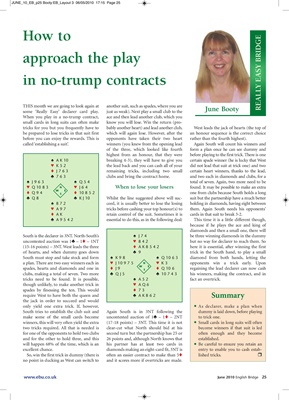 THIS month we are going to look again at another suit, such as spades, where you are

some ‘Really Easy’ declarer card play. just as weak). Next play a small club to the June Booty

When you play in a no-trump contract, ace and then lead another club, which you

small cards in long suits can often make know you will lose. Win the return (pro-

tricks for you but you frequently have to bably another heart) and lead another club, West leads the jack of hearts (the top of

be prepared to lose tricks in that suit first which will again lose. However, after the an honour sequence is the correct choice

before you can enjoy the rewards. This is opponents have taken their two heart rather than the fourth highest).

called ‘establishing a suit’. winners (you knew from the opening lead Again South will count his winners and

of the three, which looked like fourth form a plan once he can see dummy and

highest from an honour, that they were before playing to the first trick. There is one

´ A K 10 breaking 4-3), they will have to give you certain spade winner (he is lucky that West

® 763 clubs and bring the contract home. and two each in diamonds and clubs, for a

´ 872 ceed, it is usually better to lose the losing holding in diamonds, having eight between

™ A97 tricks before cashing your top honour(s) to them. Again South needs his opponents’

t AK retain control of the suit. Sometimes it is cards in that suit to break 3-2.

® A9542 essential to do this, as in the following deal: This time it is a little different though,

because if he plays the ace and king of

diamonds and then a small one, there will

South is the declarer in 3NT. North-South’s ´ J74 be three winning diamonds in the dummy

of hearts, and when dummy goes down ® 9 trick in the South hand, to play a small

spades, hearts and diamonds and one in t J9 S t Q 10 6 regaining the lead declarer can now cash

tricks need to be found. It is possible, ´ A52 fact an overtrick.

though unlikely, to make another trick in ™ AQ6

spades by finessing the ten. This would t 73

require West to have both the queen and ® AK862 Summary

the jack in order to succeed and would

only yield one extra trick. If, however, • As declarer, make a plan when

South tries to establish the club suit and Again South is in 3NT following the dummy is laid down, before playing

make some of the small cards become uncontested auction of 1® – 1t – 2NT to trick one.

winners, this will very often yield the extra (17-18 points) – 3NT. This time it is not • Small cards in long suits will often

two tricks required. All that is needed is clear-cut what North should bid at his become winners if that suit is led

and for the other to hold three, and this 26 points and, although North knows that established.

will happen 68% of the time, which is an his partner has at least two cards in • Be careful to ensure you retain an

excellent chance. diamonds making an eight-card fit, 3NT is entry to enable you to cash estab-

So, win the first trick in dummy (there is often an easier contract to make than 5t lished tricks. r

no point in ducking as West can switch to and it scores more if overtricks are made.