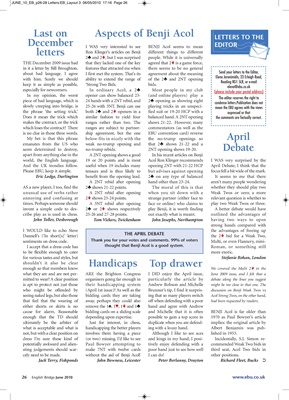 Last on Aspects of Benji Acol LETTERS TO THE

people. While it is universally

THE December 2009 issue had that they lacked one of the key agreed that 2t is a game force,

in it a letter by Bill Broughton, features that attracted me when there seems to be no general

about bad language. I agree I first met the system. That’s its agreement about the meaning Send your letters to the Editor,

with him. Surely we should ability to extend the range of of the 2® and 2NT opening Elena Jeronimidis, 23 Erleigh Road,

keep it as simple as possible, ‘Strong Two Bids. bids.

especially for newcomers. In ordinary Acol, a 2® Most people in my club (please include your postal address)

In my opinion, the worst opener can show balanced 23- (and online players) play a

piece of bad language, which is 24 hands with a 2NT rebid, and 2® opening as showing eight condense letters.Publication does not

slowly creeping into bridge, is 25-26 with 3NT. Benji can use playing tricks in an unspeci- mean the EBU agrees with the views

the phrase ‘the setting trick.’ both 2® and 2t openers in a fied suit or 19-20 HCP with a expressed or that

Does it mean the trick which similar fashion to yield four balanced hand. A 2NT opening the comments are factually correct.

makes the contract, or the trick ranges rather than two. The shows 21-22. However, many

which loses the contract? There ranges are subject to partner- commentators (as well as the

is no clue in those three words. ship agreement, but the one EBU convention card) reverse

world, the English language. 19 or 20 points and is most Acol Ron Klinger recommends I WAS very surprised by the

And the UK trendies follow. useful when 19 includes many opening 2NT with 21-22 HCP April Debate; I think that the

Please EBU, keep it simple. tenaces and is thus likely to but advises against opening focus fell a bit wide of the mark.

Eric Lodge, Darlington benefit from the opening lead. 2® on any type of balanced It seems to me that there

A 2NT rebid after opening hand other than 23-24. aren’t many people wondering

AS a new player, I too, find the 2® shows 21-22 points. The moral of this is that whether they should play two

unusual use of verbs rather A 2NT rebid after opening when you sit down with a Weak Twos or zero; a more

annoying and confusing at 2t shows 23-24 points. strange partner (either face to relevant question is whether to

times. Perhaps someone should A 3NT rebid after opening face or online) who claims to play two Weak Twos or three.

invent a simple code to des- 2® or 2t shows respectively play Benji, it is worth finding A better debate would have

cribe play as is used in chess. 25-26 and 27-28 points. out exactly what is meant. outlined the advantages of

I WOULD like to echo Steve the advantages of freeing up

Dannell’s (‘In short[s]’ letter) THE APRIL DEBATE the 2t bid for a Weak Two,

sentiments on dress code. Thank you for your votes and comments. 99% of voters Multi, or even Flannery, mini-

I accept that a dress code has thought that Benji Acol is a good system. Roman, or something still

to be flexible enough to cater more exotic.

for various tastes and styles, but Stefanie Rohan, London

shouldn’t it also be clear

enough so that members know

Handicaps Top drawer We covered the Multi 2t in the

what they are and are not per- ARE the Brighton Congress I DID enjoy the April issue, June 2009 issue, and I felt that a

mitted to wear? A clear position organisers going far enough in particularly the article by debate along the lines you suggest

is apt to protect not just those their handicap ping system Andrew Robson and Michelle might be too close to that one. The

who might be offended by (April 1st issue)? As well as the Brunner’s tip. I find it surpris- discussion on Benji Weak Twos vs

seeing naked legs, but also those bidding cards they are taking ing that so many players switch Acol Strong Twos, on the other hand,

that feel that the wearing of away, perhaps they could also off when defending with a poor had been requested by readers.

cause for alarm. Reasonable bidding cards on a sliding scale and Michelle that it is often BENJI Acol is far older than

enough that the TD should depending upon expertise. possible to gain a top score in 1970 as Paul Bowyer’s article

ultimately be the arbiter of Just for interest, in chess, duplicate when you are defend- implies: the original article by

what is acceptable and what is handicapping the better players ing with a lousy hand. Albert Benjamin was pub-

not, but with a clear position on involves them having a piece Although I like to see aces lished in 1953.

dress I’m sure these kind of (or two) missing. I’d like to see and kings in my hand, I posi- Incidentally, S.J. Simon re-

cely need to be made. without the aid of Benji Acol! I can do! other positions.