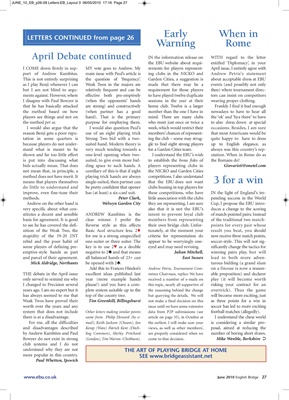 LETTERS CONTINUED from page 26 Early When in

the EBU website about requi- entitled ‘Diplomacy’, in your

I COME down firmly in sup- MY vote goes to Andrew. My rements for players represent- April issue, I entirely agree with

port of Andrew Kambites. main issue with Paul’s article is ing clubs in the NICKO and Andrew Petrie’s state ment

This is not entirely surprising the question of ‘frequency’. Garden Cities, a suggestion is about acceptable dress at EBU

ments against. However, where effective both pre-emptively to have played twelve duplicate tors can insist on competitors

I disagree with Paul Bowyer is (when the opponents’ hands sessions in the year at their wearing proper clothing.

that he has basically attacked are strong) and constructively home club. Twelve is a larger Frankly I find it bad enough

players see things and not on hand). That is the primary mind. There are many clubs the ‘ok’ and ‘hya there’ to have

the method per se. purpose for employing them. who meet just once or twice a to also dress down at special

I would also argue that the I would also question Paul’s week, which would restrict their occasions. Besides, I am sure

because players do not under- suited hand. Modern theory is gle to find eight strong players up to English elegance, as

stand what is meant to be very much tending towards a for a Garden Cities team. always was this country’s rep-

shown and far too little effort one-level opening when two- I understand the EBU’s wish utation. When in Rome do as

is put into discussing what suited, to give even more bid- to establish the bona fides of the Romans do!

bids actually mean. That does ding space to such hands. A players representing clubs in Giovaristi@onetel.com

not mean that, in principle, a corollary of this is that if eight the NICKO and Garden Cities

method does not have merit. It playing trick hands are always competitions. I also understand

means that players themselves single-suited, then partner can that the EBU does not want 3 for a win

improve, even fine-tune their has (at least) a six-card suit. these competitions, who have IN the light of England’s im-

methods. Peter Clark, little association with the clubs pending success in the World

Andrew on the other hand is Welwyn Garden City they are representing. I am sure Cup, I propose the EBU intro-

stitutes a decent and sensible ANDREW Kambites is the intent to prevent loyal club of match-pointed pairs. Instead

basis for agreement. It is good clear winner. I prefer the members from representing of the traditional two match-

to see he has covered the defi- Reverse style as this affects their own bridge club. Unfor- points for every pair whose

nition of the Weak Two, the Basic Acol structure less. 2t tunately, at the moment your result you beat, you should

stupidity of the 19-20 2NT for me is a strong unspecified criteria for representation do now receive three match points,

rebid and the poor habit of one-suiter or three suiter. The appear to be worryingly one- soccer-style. This will not sig-

some players of defining pre- key is to use 2™ as a double eyed and may need revising. nificantly change the tactics for

emptive-style hands as part negative to 2® and that means Julian Mitchell, winning pairs play, but will

and parcel of their agreement. all balanced hands of 23+ can East Sussex lead to both more adven-

Add this to Frances Hinden’s Andrew Petrie, Tournament Com- on a finesse is now a reason-

THE debate in the April issue excellent ideas published last mittee Chairman, replies: We have able proposition) and declarer

I changed to Precision several please!) and you have a com- this topic, nearly all supportive of risking your contract for an

years ago. I am no expert but it plete system suitable up to the the reasoning behind the change overtrick). Thus the game

has always seemed to me that top of the county tree. but querying the details. We will will become more exciting, just

Weak Twos have proved their Tim Greenhill, Billingshurst not make a final decision on this as three points for a win in

system that does not include Other letters making similar points data from P2P submissions (see football matches (allegedly).

them is at a disadvantage. came from Philip Howard (by e- article on page 35), in October at I understand the chess world

For me, all the difficulties mail), Keith Jackson (Cheam), Ian the earliest. I will make sure your is considering a similar pro-

and disadvantages described Kemp (Ware) Patrick Kent (Ditch- views, as well as other members’, posal, aimed at reducing the

by Andrew Kambites and Paul ling Common), Shirley Pritchard are properly considered when we number of boring short draws.

club systems and I do not