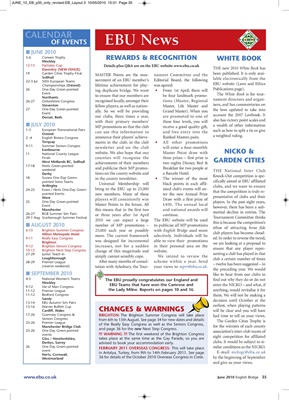 12-13 Pachabo Cup Details plus Q&A are on the EBU website www.ebu.co.uk

19 Garden Cities Trophy Final MASTER Points are the mea- n ament Committee and the been published. It is only avai-

Solihull lable electronically from the

22-3 Jul 50th European Teams surement of an EBU member’s Editorial Board, the following

ing duplicate bridge. We want • From 1st April, there will

The White Book is for tour-

Northants to ensure that our members are be four landmark promo-

Steventon fellow players, as well as nation- Master, Life Master and isers, and has commentaries on

27 One-Day Green-pointed the laws updated to take into

ally. So we will be providing Grand Master). When you

our clubs, three times a year, are pro moted to one of account the 2007 Lawbook. It

with their primary members’ these four levels, you will also has victory point scales and

n JULY 2010 MP promotions so that the club receive a good quality gift, a wealth of other information

can use this infor mation to and free entry into the

newsletter and on the club will enter a four-monthly

weekend and publicise their MP promo- Breakfast for two people at

Derby tions on the county website and a Barceló Hotel.

in the county newsletter. • The winner of the most

Universal Membership will black points in each affil-

clubs, and we want to ensure

that the competition is truly re-

new members. Many of these ter the new Annual Prize

Ware presentative of clubs and their

players will consistently win Draw with a first prize of

25 One-Day Green-pointed players. In the past eight years,

Event Master Points in the future. All £400. The annual local

however, there has been a sub-

this is because the competition’s

more. The current framework selectively. Individuals will be

9-11 Really Easy Congress ed. In order to reverse the trend,

Brighton was designed for incremental able to view their promotions

we are looking at a proposal to

9-12 Brighton Seniors Congress increases, not for a sudden in their personal area on the

10-12 Brighton Next Step Congress ensure that any player repre-

simply cannot sensibly cope. We intend to review the

club a certain number of times

28-29 Premier League After many months of consul- scheme within a year. Send

– twelve has been suggested – in

tation with Aylesbury, the Tour- your views to mprr@ebu.co.uk.

the preceding year. We would

n SEPTEMBER 2010 like to hear from our clubs to

EBU Teams that have won the Camrose and enter the NICKO – and what, if

11-12 Premier League the Lady Milne. Reports on pages 10 and 16. anything, would revitalise it for

11-12 Bedford Congress them. We will not be making a

decision until October at the

Cardiff, Wales CHANGES & WARNINGS will be clear and you will have

17-26 Guernsey Congress & BRIGHTON: The Brighton Summer Congress will take place had time to tell us your views.

of the Really Easy Congress as well as the Seniors Congress,

Manchester Bridge Club for the winners of each county

and page 36 for the new Next Step Congress.

events !!! WARNING !!! The first weekend of the Brighton Congress

Glos / Herefordshire, takes place at the same time as the Gay Parade, so you are eight competition for affiliated

Derbys, Surrey advised to book your accommodation early. clubs. It would be subject to si-

26 One Day Green-pointed FEBRUARY 2011 OVERSEAS CONGRESS: This will take place milar conditions as the NICKO.

Westmorland 36 for details of the October 2010 Overseas Congress in Crete. by the beginning of September

and give us your views.