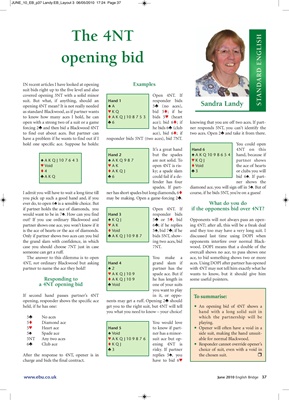 IN recent articles I have looked at opening Examples

suit bids right up to the five level and also

covered opening 3NT with a solid minor Open 4NT. If

suit. But what, if anything, should an Hand 1 responder bids

opening 4NT mean? It is not really needed ´A 5® (no aces), Sandra Landy

as standard Blackwood, as if partner wants ™KQ bid 5t; if he

forcing 2® and then bid a Blackwood 4NT he bids 6® (club ner responds 5NT, you can’t identify the

to find out about aces. But partner can ace), bid 6t; if two aces. Open 2® and take it from there.

have a problem if he wants to find out if I responder bids 5NT (two aces), bid 7NT.

hold one specific ace. Suppose he holds: You could open

fender has four ner shows the

spades. If part- diamond ace, you will sign off in 5´. But of

I admit you will have to wait a long time till ner has short spades but long diamonds, 6t course, if he bids 5NT, you’re on a guess!

you pick up such a good hand and, if you may be making. Open a game-forcing 2®.

ever do, to open 6´ is a sensible choice. But What do you do

if partner holds the ace of diamonds, you Open 4NT. If if the opponents bid over 4NT?

would want to be in 7´. How can you find Hand 3 responder bids

out? If you use ordinary Blackwood and ´KQJ 5® or 5t, bid Opponents will not always pass an open-

partner shows one ace, you won’t know if it ™AK 6®; if he replies ing 4NT; after all, this will be a freak deal

the grand slam with confidence, in which ing two aces, bid opponents interfere over normal Black-

case you should choose 7NT just in case 7NT. wood. DOPI means that a double of the

someone can get a ruff. overcall shows no ace, to pass shows one

The answer to this dilemma is to open You make a ace, to bid something shows two or more

partner to name the ace they hold! ´2 partner has the with 4NT may not tell him exactly what he

Responding to t A K Q J 10 9 he has length in some useful pointers.

a 4NT opening bid ® Void one of your suits

you want to play

If second hand passes partner’s 4NT in it, or oppo- To summarise:

opening, responder shows the specific ace nents may get a ruff. Opening 2® should

held, if he has one: get you to the right suit, but 4NT will tell • An opening bid of 4NT shows a

you what you need to know – your choice! hand with a long solid suit in

5® No aces which the partnership will be

5´ Spade ace ´ Void ner has a minor- side suit, making the hand unsuit-

®3 risky. If partner choice of suit, even with a void in

After the response to 4NT, opener is in replies 5´, you the chosen suit. r

charge and bids the final contract. have to bid 6™