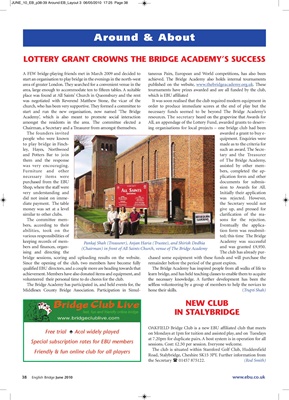 A FEW bridge-playing friends met in March 2009 and decided to taneous Pairs, European and World competitions, has also been

start an organisation to play bridge in the evenings in the north-west achieved. The Bridge Academy also holds internal tournaments

area of greater London. They searched for a convenient venue in the published on the website, www.thebridgeacademy.org.uk. These

area, large enough to accommodate ten to fifteen tables. A suitable tournaments have prizes awarded and are all funded by the club,

was negotiated with Reverend Matthew Stone, the vicar of the It was soon realised that the club required modern equipment in

church, who has been very supportive. They formed a committee to order to produce immediate scores at the end of play but the

start and run the new organisation, now named ‘The Bridge necessary funds seemed to be beyond The Bridge Academy’s

Academy’, which is also meant to promote social interaction resources. The secretary heard on the grapevine that Awards for

amongst the residents in the area. The committee elected a All, an appendage of the Lottery Fund, awarded grants to deserv-

Chairman, a Secretary and a Treasurer from amongst themselves. ing organisations for local projects – one bridge club had been

The founders invit ed awarded a grant to buy e-

people who were known quipment. Enquiries were

to play bridge in Finch- made as to the criteria for

ley, Hayes, Northwood such an award. The Secre-

and Potters Bar to join tary and the Treasurer

them and the response of The Bridge Academy,

was very encour aging. assisted by other mem-

Furniture and other bers, completed the ap-

necessary items were plication form and other

purchased from the EBU documents for submis-

Shop, where the staff were sion to Awards for All.

very understanding and Initially their application

did not insist on imme- was rejected. However,

diate payment. The table the Secretary would not

money was set at a level give up, and pressed for

similar to other clubs. clarification of the rea-

The committee mem- sons for the rejection.

bers, according to their Eventually the applica-

abilities, took on the tion form was resubmit-

various responsibilities of ted; this time The Bridge

bers and finances, organ- (Chairman) in front of All Saints Church, venue of The Bridge Academy and was granted £9,950.

ising and directing the The club has already pur-

bridge sessions, scoring and uploading results on the website. chased some equipment with these funds and will purchase the

Since the opening of the club, two members have become fully remainder before the period of the grant expires.

qualified EBU directors, and a couple more are heading towards that The Bridge Academy has inspired people from all walks of life to

achievement. Members have also donated items and equipment, and learn bridge, and has held teaching classes to enable them to acquire

volunteered their personal time to do chores for the club. the necessary knowledge. A further development has been the

The Bridge Academy has participated in, and held events for, the selfless volunteering by a group of members to help the novices to

Free trial ´ Acol widely played on Mondays at 1pm for tuition and assisted play, and on Tuesdays

at 7.20pm for duplicate pairs. A host system is in operation for all

The club is situated within Stamford Golf Club, Huddersfield