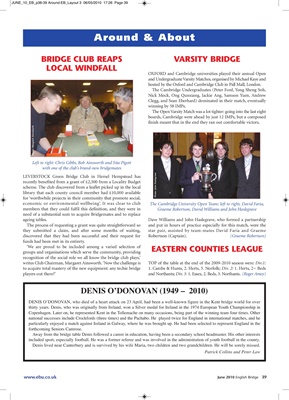 and Undergraduate Varsity Matches, organised by Michael Kaye and

hosted by the Oxford and Cambridge Club in Pall Mall, London.

Clegg, and Sean Eberhard) dominated in their match, eventually

The Open Varsity Match was a lot tighter: going into the last eight

boards, Cambridge were ahead by just 12 IMPs, but a composed

finish meant that in the end they ran out comfortable victors.

with one of the club’s brand-new bridgemates

recently benefited from a grant of £2,500 from a Locality Budget

scheme. The club discovered from a leaflet picked up in the local

library that each county council member had £10,000 available

for ‘worthwhile projects in their community that promote social,

economic or environmental wellbeing’. It was clear to club The Cambridge University Open Team: left to right, David Faria,

members that they could fulfil this definition, and they were in Graeme Robertson, David Williams and John Haslegrave

need of a substantial sum to acquire Bridgemates and to replace

The process of requesting a grant was quite straightforward so and put in hours of practice especially for this match, were the

they submitted a claim, and after some months of waiting, star pair, assisted by team-mates David Faria and Graeme

discovered that they had been successful and their request for Robertson (Captain). (Graeme Robertson)

funds had been met in its entirety.

‘We are proud to be included among a varied selection of

recognition of the social role we all know the bridge club plays,’

writes Club Chairman, Margaret Ainsworth. ‘Now the challenge is TOP of the table at the end of the 2009-2010 season were: Div.1:

Denis O’DOnOvan, who died of a heart attack on 23 april, had been a well-known figure in the Kent bridge world for over

thirty years. Denis, who was originally from ireland, won a silver medal for ireland in the 1974 european Youth Championship in

Copenhagen. Later on, he represented Kent in the Tollemache on many occasions, being part of the winning team four times. Other

national successes include Crockfords (three times) and the Pachabo. He played twice for england in international matches, and he

particularly enjoyed a match against ireland in Galway, where he was brought up. He had been selected to represent england in the

away from the bridge table Denis followed a career in education, having been a secondary school headmaster. His other interests

included sport, especially football. He was a former referee and was involved in the administration of youth football in the county.

Denis lived near Canterbury and is survived by his wife Maria, two children and two grandchildren. He will be sorely missed.