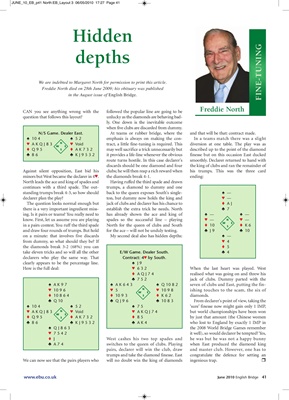 question that follows this layout? unlucky as the diamonds are behaving bad-

ly. One down is the inevitable outcome

when five clubs are discarded from dummy.

N/S Game. Dealer East. At teams or rubber bridge, where the and that will be that: contract made.

™ AKQJ83 WN E ™ Void tract, a little fine-tuning is required. This diversion at one table. The play was as

route turns hostile. In this case declarer's smoothly. Declarer returned to hand with

Against silent opposition, East bid his clubs; he will then reap a rich reward when his trumps. This was the three card

minors but West became the declarer in 4™. the diamonds break 4-1. ending:

continues with a third spade. The out- trumps, a diamond to dummy and one

standing trumps break 4-3, so how should back to the queen exposes South's single- ´ —

declarer plan the play? ton, but dummy now holds the king and ™ —

there is a very important ingredient miss- establish the extra trick he needs. North ® 7

ing. Is it pairs or teams? You really need to has already shown the ace and king of ´ — ´ —

know. First, let us assume you are playing spades so the successful line – playing ™ — N ™ —

in a pairs contest. You ruff the third spade North for the queen of clubs and South t 10 S t K6

on a minute: that involves five discards My second deal also has hidden depths: ´ —

take eleven tricks and so will all the other E/W Game. Dealer South. ® 4

declarers who play the same way. That Contract: 4™ by South.

clearly appears to be the percentage line. ´ J9

Here is the full deal: ™ 632 When the last heart was played. West

t AQJ74 realised what was going on and threw his

™ AKQJ83 N ™ Void ™ AKQJ74 but world championships have been won

® A74 switches to the queen of clubs. Playing when East produced the diamond king

pairs, declarer will win the club, draw and master club. However, one has to

trumps and take the diamond finesse. East congratulate the defence for setting an

We can now see that the pairs players who will no doubt win the king of diamonds ingenious trap. r