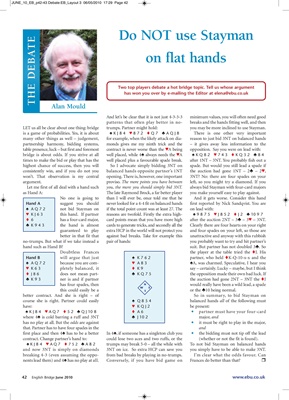 THE DEBATE Do NOT use Stayman

And let’s be clear that it is not just 4-3-3-3 minimum values, you will often need good

patterns that often play better in no- breaks and the hands fitting well, and then

LET us all be clear about one thing: bridge trumps. Partner might hold: you may be more inclined to use Stayman.

many other things as well – judgement, for example, when the likely attack on dia- reason to just bid 3NT on balanced hands

partnership harmony, bidding systems, monds gives me my ninth trick and the – it gives away less information to the

table presence, luck – but first and foremost contract is never worse than the ™A being opposition. Say you were on lead with:

times to make the bid or play that has the well placed plus a favourable spade break. after 1NT – 3NT. You probably fish out a

highest chance of success, then you will So I advocate simply bidding 3NT on spade. But would you still lead a spade if

consistently win, and if you do not you balanced hands opposite partner’s 1NT the auction had gone 1NT – 2® – 2™,

won’t. That observation is my central opening. There is, however, one important 3NT? No: there are four spades on your

argument. proviso. The more points you have between left, so you might try a diamond. If you

Let me first of all deal with a hand such you, the more you should simply bid 3NT. always bid Stayman with four-card majors

as Hand A: The late Raymond Brock, a far better player you make yourself easy to play against.

No one is going to than I will ever be, once told me that he And it gets worse. Consider this hand

Hand A suggest you should never looked for a 4-4 fit on balanced hands first reported by Nick Sandqvist. You are

´ AQ72 not bid Stayman on if the total point count was at least 27. The on lead with:

® K943 the hand is almost cards to generate tricks, and secondly all the Clearly there are four hearts on your right

guaranteed to play extra HCP in the world will not protect you and four spades on your left, so those are

better in that fit that against bad breaks. Take for example this unattractive and anyway with this rubbish

no-trumps. But what if we take instead a pair of hands: you probably want to try and hit partner’s

hand such as Hand B? suit. But partner has not doubled 3®. So

Doubtless Frances the player at the table tried the tJ. His

t J86 does not mean part- ® KQ75 the opposition made their own bad luck. If

has four spades, then N would really have been a wild lead, a spade

this could easily be a S or the ®10 being normal.

better contract. And she is right – of So in summary, to bid Stayman on

course she is right. Partner could easily ´ Q854 balanced hands all of the following must

has no play at all. But the odds are against • it must be right to play in the major,

that. Partner has to have four spades in the and

first place and then 4´ has to be a better In 4´, if someone has a singleton club you • the bidding must not tip off the lead

contract. Change partner’s hand to: could lose two aces and two ruffs, or the (whether or not the fit is found).

and now 3NT is simply on diamonds 3NT on ice. So extra HCP can save you you simply have to be able to make 3NT.

breaking 4-3 (even assuming the oppo- from bad breaks by playing in no-trumps. I’m clear what the odds favour. Can

nents lead them) and 4´ has no play at all. Conversely, if you have bid game on Frances do better than that? r