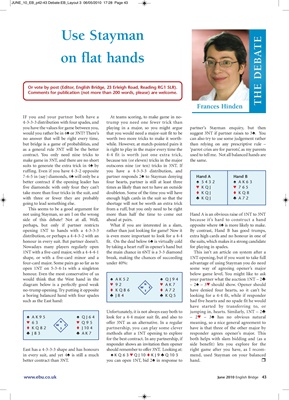 IF you and your partner both have a At teams scoring, to make game in no-

4-3-3-3 distribution with four spades, and trump you need one fewer trick than

you have the values for game between you, playing in a major, so you might argue partner’s Stayman enquiry, but then

would you rather be in 4´ or 3NT? There’s that you would need a major-suit fit to be suggest 3NT if partner raises to 3´. You

no answer that will be right every time, worth two more tricks to make it worth- can also try to use some judgement rather

but bridge is a game of probabilities, and while. However, at match-pointed pairs it than relying on any prescriptive rule –

as a general rule 3NT will be the better is right to play in the major every time the ‘parrot cries are for parrots’, as my parents

contract. You only need nine tricks to 4-4 fit is worth just one extra trick, used to tell me. Not all balanced hands are

make game in 3NT, and there are no short because ten (or eleven) tricks in the major the same.

suits to generate the extra trick in 4´ by outscores nine (or ten) tricks in 3NT. If

better contract if the opening leader has four hearts, partner is still at least three ´ 5432 ´ AK63

five diamonds: with only four they can’t times as likely than not to have an outside ™ KQJ ™ 765

take more than four tricks in the suit, and doubleton. Some of the time you will have t KQJ t KQ8

going to lead something else. shortage will not be worth an extra trick

This seems to be a good argument for from a ruff, but you only need to be right

not using Stayman, so am I on the wrong more than half the time to come out Hand A is an obvious raise of 1NT to 3NT

side of this debate? Not at all. Well, ahead at pairs. because it’s hard to construct a hand

perhaps, but only if partner restricts What if you are interested in a slam, opposite where 4´ is more likely to make.

opening 1NT to hands with a 4-3-3-3 rather than just looking for game? Now it By contrast, Hand B has good trumps,

distribution, or perhaps a 4-4-3-2 with an is even more important to look for a 4-4 extra high cards and no honour in one of

honour in every suit. But partner doesn’t. fit. On the deal below 6´ is virtually cold the suits, which makes it a strong candidate

Nowadays many players regularly open by taking a heart ruff in opener’s hand but for playing in spades.

shape, or with a five-card minor and a break, making the chances of succeeding 1NT opening, but if you want to take full

four-card major. Some pairs go so far as to under 40%: advantage of using Stayman you do need

no-trump opening. Try putting it opposite t KQ86 S t A72 have denied four hearts, so it can’t be

a boring balanced hand with four spades ® J84 ® KQ5 looking for a 4-4 fit, while if responder

such as the East hand: had five hearts and no spade fit he would

have started by transferring to, or

Unfortunately, it is not always easy both to jumping in, hearts. Similarly, 1NT – 2®

™ 63 N ™ Q95 offer 3NT as an alternative. In a regular meaning, so a nice general agreement to

t KQ82 S t J 10 4 partnership, you can play some clever have is that three of the other major by

for the best contract. In any partnership, if both helps with slam bidding and (as a

East has a 4-3-3-3 shape and has honours should remember to offer 3NT. Looking at: right game after you have, as I recom-

better contract than 3NT. you can open 1NT, bid 2´ in response to hand. r