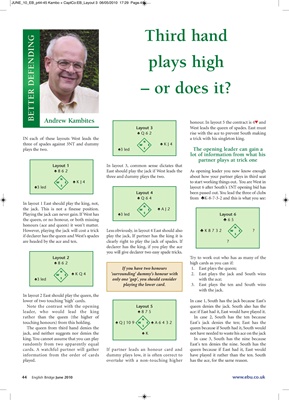 Andrew Kambites honour. In layout 5 the contract is 4™ and

Layout 3 West leads the queen of spades. East must

´Q62 rise with the ace to prevent South making

IN each of these layouts West leads the a trick with his singleton king.

three of spades against 3NT and dummy W E ´KJ4

The opening leader can gain a

lot of information from what his

partner plays at trick one

three and dummy plays the two. about how your partner plays in third seat

W E ´KJ4 to start working things out. You are West in

Layout 4 been passed out. You lead the three of clubs

In layout 1 East should play the king, not,

the jack. This is not a finesse position. W E ´AJ2

Playing the jack can never gain. If West has ´3 led Layout 6

the queen, or no honour, or both missing ®65

However, playing the jack will cost a trick Less obviously, in layout 4 East should also ®K8732 W E ?

if declarer has the queen and West’s spades play the jack, If partner has the king it is

are headed by the ace and ten. clearly right to play the jack of spades. If ?

declarer has the king, if you play the ace

you will give declarer two easy spade tricks.

If you have two honours 1. East plays the queen;

´3 led only one 'gap', you should consider with the ace;

In layout 2 East should play the queen, the

lower of two touching ‘high' cards. In case 1, South has the jack because East's

Note the contrast with the opening Layout 5 queen denies the jack. South also has the

leader, who would lead the king ´875 ace: if East had it, East would have played it.

rather than the queen (the higher of N

In case 2, South has the ten because

The queen from third hand denies the queen because if South had it, South would

jack, and neither suggests nor denies the ´K not have needed to waste his ace on the jack

king. You cannot assume that you can play In case 3, South has the nine because

cards. A watchful partner will gather If partner leads an honour card and queen because if East had it, East would

information from the order of cards dummy plays low, it is often correct to have played it rather than the ten. South

played. over take with a non-touching higher has the ace, for the same reason.