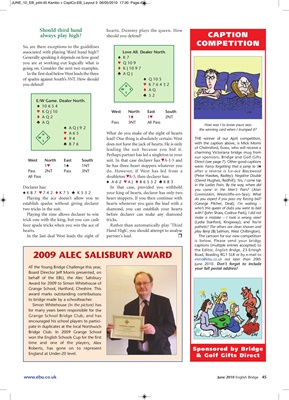 Should third hand hearts. Dummy plays the queen. How

So, are there exceptions to the guidelines COMPETITION

Generally speaking it depends on how good ´ K7

In the first deal below West leads the three ® AQJ

How was I to know yours was

´ AQJ92 the winning card when I trumped it?

N ™ A65 What do you make of the eight of hearts

t 94 lead? One thing is absolutely certain: West THE winner of our April competition,

® 876 does not have the jack of hearts. He is only with the caption above, is Mick Morris

leading the suit because you bid it. of Chelmsford, Essex, who will receive a

Perhaps partner has led a singleton in your our sponsors, Bridge and Golf Gifts

1™ 1´ 1NT he has three heart stoppers whatever you were: Fancy forgetting that a jump to 3´

Pass 2NT Pass 3NT do. However, if West has led from a after a reverse is Six-ace Blackwood

in the Ladies Pairs. By the way, where did

Declarer has: In that case, provided you withhold you come in the Men’s Pairs? (Alan

Playing the ace doesn’t allow you to heart stoppers. If you then continue with do you expect if you pass my forcing bid?

establish spades without giving declarer hearts whenever you gain the lead with a (George Pilcher, Deal); I’m waiting –

two tricks in the suit. diamond, you can establish your hearts who’s this queen of clubs you went to bed

Playing the nine allows declarer to win before declarer can make any diamond with? (John Shaw, Codnor Park); I did not

make a mistake – I took a wrong view!

trick one with the king, but you can cash tricks. (Lydia Stanford, Kingsway); and You're

four spade tricks when you win the ace of Rather than automatically play 'Third pathetic! The others are clean shaven and

In the last deal West leads the eight of partner's lead. r The cartoon for our new competition

AT the Young Bridge Challenge this year, your full postal address!

Board Director Jeff Morris presented, on

behalf of the EBU, the Alec Salisbury

Award for 2009 to Simon Whitehouse of

to bridge made by a schoolteacher.

Simon Whitehouse (in the picture) has

for many years been responsible for the

Grange School Bridge Club, and has

encouraged his school players to partici-

pate in duplicates at the local Northwich

won the English Schools Cup for the first

time and one of the players, Alex

Roberts, has gone on to represent Sponsored by Bridge

England at Under-20 level.