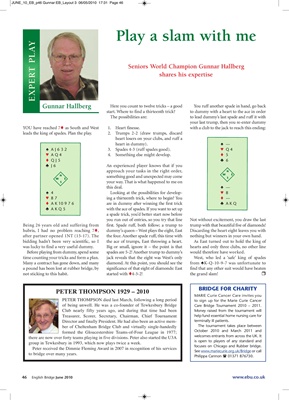 Play a slam with me

Gunnar Hallberg Here you count to twelve tricks – a good You ruff another spade in hand, go back

start. Where to find a thirteenth trick? to dummy with a heart to the ace in order

The possibilities are: to lead dummy’s last spade and ruff it with

your last trump, then you re-enter dummy

YOU have reached 7t as South and West 1. Heart finesse. with a club to the jack to reach this ending:

heart losers on your clubs, and ruff a

® J6 An experienced player knows that if you

approach your tasks in the right order, N

something good and unexpected may come S

S your way. That is what happened to me on

´ 4 Looking at the possibilities for develop- ™ 8

® AKQ5 with the ace of spades. If you want to set up

you run out of entries, so you try that line Not without excitement, you draw the last

Being 26 years old and suffering from first. Spade ruff, both follow; a trump to trump with that beautiful five of diamonds!

hubris, I had no problem reaching 7t, dummy’s queen – West plays the eight, East Discarding the heart eight leaves you with

after partner opened 1NT (15-17). The the four. Another spade ruff, this time with nothing but winners in your own hand.

bidding hadn’t been very scientific, so I the ace of trumps, East throwing a heart. As East turned out to hold the king of

was lucky to find a very useful dummy. Big or small, ignore it – the point is that hearts and only three clubs, no other line

Before playing from dummy, spend some spades are 5-2! Another trump to dummy’s would therefore have worked.

time counting your tricks and form a plan. jack reveals that the eight was West’s only West, who led a ‘safe’ king of spades

Many a contract has gone down, and many diamond. At this point, you should see the from ´K-Q-10-9-7 was unfortunate to

a pound has been lost at rubber bridge, by significance of that eight of diamonds: East find that any other suit would have beaten

not sticking to this habit. started with t4-3-2! the grand slam! r

of being unwell. he was a co-founder of tewkesbury Bridge Care Bridge Tournament 2010 – 2011.

Club nearly fifty years ago, and during that time had been Money raised from the tournament will

Director and finally President. he had also been an active mem- terminally ill patients.

there are now over forty teams playing in five divisions. Peter also started the U3A welcomes entrants from across the UK. It

is open to players of any standard and

group in tewkesbury in 1993, which now plays twice a week.

focuses on Chicago and Rubber bridge.