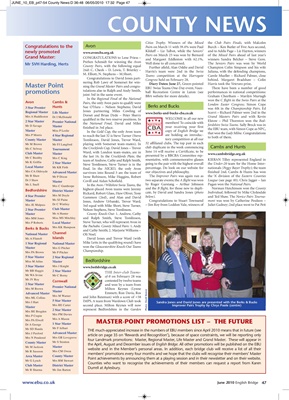 Cities Trophy. Winners of the Mixed the Club Pairs Finals, with Malcolm

Congratulations to the Avon Pairs on March 11 with 59.4% were Paul Burch – Ken Butler of Five Aces second,

Preben Schmidt for winning the Avon Well done to all concerned. The Seniors Pairs was won by World

Master Point ning the Grand Master Pairs and congra- EBU Swiss Teams One-Day event, Vaux- There have been a number of good

Mrs A Huddleston Dr I McDonald

qualified in the two reserve positions. In WELCOME to all our new

the National Final, David and Miles members! To coincide with

finished in 3rd place. your receiving your first

the EBU team, with Simon Cope as NPC,

In the Gold Cup, the only Avon team copy of English Bridge we

that won the Lady Milne. Congratulations

to both of them.

Ward, with London team-mates, are in June 14 will receive a Certificate, to be

the last 16. In the Crockfords Plate, the presented by a BBCBA Committee rep-

Steve Tomlinson, Steve Turner is in the going to the pair with the highest overall the Under-20 team for the Home Inter-

final. In the NICKO, the only Avon

Mrs CA Oldroyde Advanced Master survivors into Round 5 are the team of our objectives and philosophy. finished 2nd. Cambs & Hunts has won

Mr B Shaw Mr P Dixon Irene Robinson, Mike Huggins, Robert The Improver Pairs was again run as the ‘A’ division of the Eastern Counties

highest-placed Avon teams were Jeremy and the B flight, for those new to dupli- Norman Hutchinson won the County

Gammon (2nd), and Alan and David

Ms A Flintoft Islands David Jones and Trevor Ward (with

2 Star Master and won by a team from

Mrs M Warner and John Bateman) with a score of +58

5 Star Master IMPS. A team from Wardown Club took Sandra Jones and David Jones are presented with the Berks & Bucks

article on page 35 on ‘Rewards and Recognition’), because of space constraints, we will be reporting only

the April, August and December issues of English Bridge. All other promotions will be published on the EBU

website and in the Member’s personal areas. In addition, each bridge club will receive a list of all their

Point achievements by announcing them at a playing session and in their newsletter and on their website.