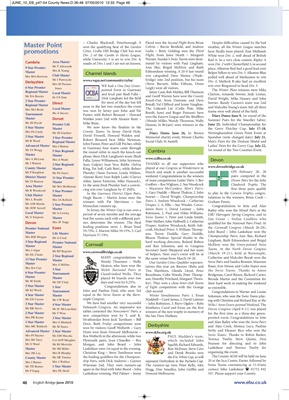 – Charles Blackwell. Peterborough A Flood won the Second Flight from Brian Despite difficulties caused by the bad

Master Point won the qualifying heat of the Garden Colvin – Barrie Benfield, and Andrew weather, all the Winter League matches

have finally been played. East Midlands

while University 3 is set to win Div. 4; Warner. Sunday’s Swiss Teams were dom- Rail A. In a very close contest, Ripley A

Cumbria Area Master results of Divs 1 and 3 are not yet known. inated by visitors with Paul Lingham, won Div. 2 with Chesterfield A in second

Mr J Pietrzycki www.cwgsy.net/community/cicba/ bridge) into 2nd position, but his team Div. 4. Matlock B also had an excellent

WE had a One Day Green- win over Ringwood to head Div. 5.

pointed Event in Guernsey The Winter Plate winners were Mike

Direct for most of the day but fell Sowter. Randy Curzon’s team was 2nd

away in the last two matches; the event and Malcolm Young’s team 3rd: all three

was won by Jersey pair John and Pat teams were well ahead of the field.

Tournament Ms A Davies Booth, Janet and Roger Putnam) have

Panter, with Robert Brouard – Howard Diary Dates: June 9, 1st round of the

won the Eastern League and the Shufflers

Premier Life Heaton, Jo Bryant) were winners in the June 23, Individual Championship for

5 Star Master Master We now know the finalists in the west. the Gerry Fletcher Cup. July 17-18,

in Guernsey four teams came through

the round robin to reach the knock-out

County Master played at our Congress at Windermere in www.devonbridge.co.uk

Hugh Bacon – Martin Jones were the tulations to the winners, Brian Cook –

In Jersey, the Winter Cup is run over a Bailey who won the Mixed Pairs at the

Local Master Mr A Cowley period of seven months and the average Robinson, 2. Paul and Hilda Williams. EBU Harrogate Spring Congress, and to

qualified for the National Pairs Final. At

Cornwall and Ken Johnston, and to Congress McElroy won the Green-pointed Swiss

Mr DL Clarke of helpers. Next year’s event will be at (March 19-21), held at Barnstaple,

2 Star Regional MANY congratulations to

13 Star Premier the same venue from March 18-20. Catherine and Malcolm Boyak won the

Mrs S Millins Heaton, who have won the

5 Star Master 1 Star Congratulations also to of Eight competition with the Grange so enjoyable.

tables contested the Newcomers’ Pairs, a winners of the new trophy in memory of

Dove. Both Friday competitions were

County Master Mr SR Timmis the leading qualifiers for the Champion- the Eric White Cup, so will The County AGM will be held on June