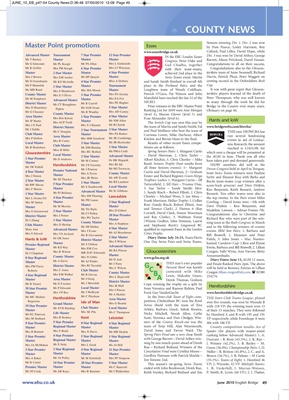 IN the EBU London Easter

Mr M Songhurst Master Mrs EA Fox Mansfield have reached the last 32 of the Peter Thompson, who was well known

District Master Mr B Carroll Mrs PE Hughes NICKO. to many through the work he did for

The Switch Cup was won this year by

2 Star Master Advanced Master – David Sherman, 2. Chris Taylor – the AGM in June. Thank you all who

Foster and Richard Register. Gwen Herga Serby and Eleanor Rice with Berks and

Mrs PG Taylor and Ray Clarke), 3. Waltham Forest Richard Ray who were part of the win-

Mr JM Duthie and Stephanie Burtt); Lingwood BC and to the following winners of county

Mr J Parry THIS year’s ever popular and Finale Ranked Pairs 2pm. The above

Mrs L Wilson Newent Bowl was keenly will be held at Romsey. Entries to Lillian

from Veronica and Kanwar Rahim, Paul

Rogerson Isle of Man petition, Cheltenham BC won the Rank over five rounds, was won by Wyeside B

19 Star Premier Xerox Shield with the team of Eira with 218 VP; the winning team won 13

Master Arkley, Barbara Lloyd, Ashok Kwatra, of their 15 matches. They were followed

Mr EC Paterson Nicky Mitchell, Norah Allen, Cathy by Hereford A and B with 195 and 191