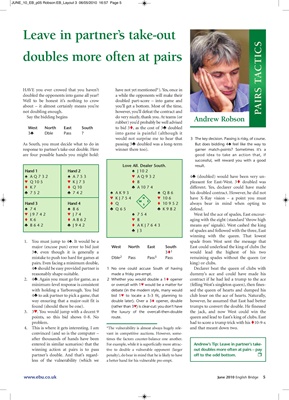 HAVE you ever crowed that you haven’t have not yet mentioned*). Yes, once in

about – it almost certainly means you’re you’ll get a bottom. Most of the time,

not doubling enough. however, you’ll defeat the contract and

Say the bidding begins do very nicely, thank you. At teams (or

West North East South to bid 3t, as the cost of 3® doubled

3® Dble Pass ? into game is painful (although it

would not surprise me to hear that 3 The key decision. Passing is risky, of course.

As South, you must decide what to do in passing 3® doubled was a long-term But does bidding 4® feel like the way to

are four possible hands you might hold: good idea to take an action that, if

successful, will reward you with a good

® J3 of spades and followed with the three, East

winning with the queen. That lowest

1. You must jump to 4´. It would be a spade from West sent the message that

3´, even though it is generally a 3t1 would lead the highest of his two

pairs. Even facing a minimum double, king) or clubs.

reasonably shape-suitable. made a frisky pre-empt. dummy’s ace and could have made his

2. 4®. Again you must go for game, as a 2 Whether you would double a 1t opener contract if he had led a trump to the ace

minimum-level response is consistent or overcall with 1™ would be a matter for (felling West’s singleton queen), then fines-

with holding a Yarborough. You bid debate (in the modern style, many would sed the queen of hearts and dumped his

4® to ask partner to pick a game, that bid 1™ to locate a 5-3 fit, planning to club loser on the ace of hearts. Naturally,

way ensuring that a major-suit fit is double later). Over a 3t opener, double however, he assumed that East had better

found (should there be one). (rather than 3™) is clear-cut: you don’t have trumps to convert the double. He finessed

3. 3™. You would jump with a decent 9 the luxury of the overcall-then-double the jack, and now West could win the

points, so this bid shows 0-8. No route. queen and lead to East’s king of clubs. East

problem. had to score a trump trick with his t10-9-x

4. This is where it gets interesting. I am *The vulnerability is almost always hugely rele- and that meant down two.

convinced (and so is the computer – vant in competitive auctions. However, some-

after thousands of hands have been times the factors counter-balance one another.

entered in similar scenarios) that the For example, while it is superficially more attrac- Andrew’s Tip: Leave in partner’s take-

partner’s double. And that’s regard- penalty), do bear in mind that he is likely to have off to the odd bottom. r

less of the vulnerability (which we a better hand for his vulnerable pre-empt.