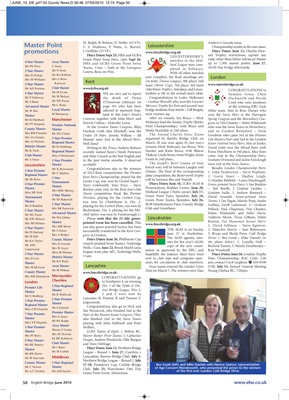 Teams, 11am – both at the Larruperz plet ed in February.

With all other matches

WE are very sad to report Susanna Gross, Chris

the death of Denis Duck worth and Nicole

Master M Marinescu land in this year’s Seniors were runners-up. won the Swiss Pairs at the Harrogate

At the London Easter Congress, Rhys Pairs Championship), with Brian and who won the Swiss Teams in Shrewsbury;

Horlock (with Alex Mitchell) won the Sheila Stockdale in 2nd place. and to Gordon Rainsford – Dom

Under 19 Pairs. Jeremy Willans – Jill Goodwin who came 3rd in the Premier

Skinner were 2nd in the Mixed Pairs. Life Masters Pairs and 2nd in the London

Writing in the Times, Andrew Robson

Mr A Omar 1 Star Premier in the past twelve months. A deserved Grant in 2nd place. Graham Orsmond and Jackie Fairclough

Master accolade! The Joseph’s Bowl (teams of four were 2nd in the Swiss Teams.

Ms K Reissmann Congratulations also to the winners knock-out) will be between Langley and Results: London Championship Pairs:

Mr SE Knox will be between Bee and Nuttall. 3. Heather Bakhshi – Laura Macdougall.

Master was won by Chislehurst A. Div. 2,

playing for the Corbett Plate, was won by

Mrs A Walker gress in October.

London Cheshire to Southport A on winning

2 Star Premier Lancaster B, Preston B and Preston C

Miss CM Girardin Sue Woodcock, who finished 2nd in the

Pairs at the Buxton Easter Congress. They

Mr C Nelson Master of Age Concern Wandsworth, who presented the prizes to the winners