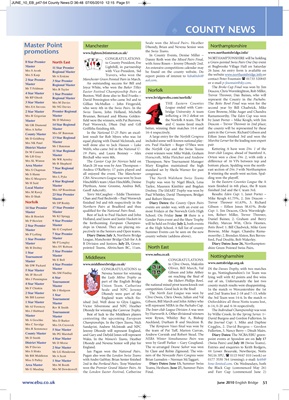 Mrs S Avoth Regional Master with Vice-President, Sid be found on the county website. Do 26 June. An entry form is available on

Mrs S Karp Mr A Erskine Travers, who won the report points of interest to hsbakhshi@ the website www.northantsbridge.info or

Master An outstanding success for Bill and or e-mail p-fountain@sky.com.

David Pennington who came 3rd and to

Mrs EA Stevens Mr NG Davies who were 4th in the Swiss Pairs. In the League ended with Cam- second year by Bill Chadwick, Mike

Master Mr D Maloney field were the winners, with Pat Burrows, the Norfolk A team. The B by Janet Porter – Mike Keogh, with Jim

Miss A Sellar Master Griffiths finishing 4th. better, winning their matches 14-6 and the county will be represented by these

County Master Mrs SF Bateman In the National U-25 Pairs an excel- 16-4 respectively. pairs in the Corwen. Richard Gibson and

District Master Webb, who came 3rd in the National U- the Norfolk Cup and the Swiss Teams Kettering A have won Div. 1 of the

Birchall who were 8th. Horscroft, Mike Fletcher and Andrew Orton won a close Div. 2, with only a

The Cantor Cup for Novices held on Thompson. New Tournament Manager difference of 16 VPs between top and

7 Star Regional Andrea O’Rafferty; 17 pairs played and standard set by Sheila Warner for past east section of Div. 3 with Northampton

Master all enjoyed the event. The Manchester congresses. B winning the south-west section. Spal-

14 Star Premier 17 Star Premier Northern Pairs at Bradford and thus events are under way, with an event on Gibson – Eifion Jones 58.41%. Broke

Mrs B Howlett Mr KJ Spragg Best of luck to Paul Hackett and John School. On Friday June 18 there is a ton, Robert Miller, Trevor Thrower,

Holland, and Jason and Justin Hackett in Gender Pairs event and the Shaw Trophy Daniel Baines; 2. Graham and Berry

ships in Ostend. They are playing res- at the High School. A full list of county Betts Bowl: 1. Bill Chadwick, Mike Gore

pectively in the Seniors and Open teams. Summer Events can be seen on the new Browne, Mike Auger, Chandra Rama-

Tournament part of the English Bridge the Hubert Phillips Bowl, out of six. Unfortunately the last two

Mr F Chinkin competition. Good luck in the final! In the match vs Worcestershire the 1st

2 Star Master Dhondy were part of the The North East League was won by and 2nd Teams lost 2-18 and 7-13, while

Mrs J Hubbard Dhondy for winning the Camrose Trophy. The Inter-club League Division A was won The Individual Championship was won

Tournament by Hurworth A. Other divisional winners

Master Best of luck to the Middlesex players by Willie Crook. In the Spring Series: 1=

Mr A Geschke contesting the upcoming European David Burgess and Gordon Fullerton. In

Mrs D Barker Auckland, Durham B and Stockton B.

Championships. In the Open Teams, Nick the Journal Cup: 1. Mike and Daphne