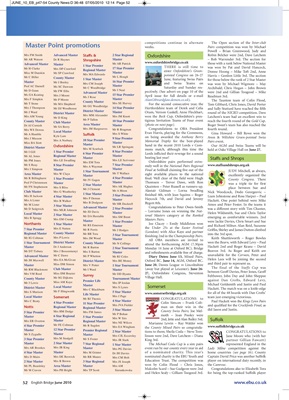 competitions continue in alternate The Open section of the Inter-club

Advanced Master Mr AR Patrick www.oxfordshirebridge.co.uk those with a rank below National Master

Mr H Clarke Mrs DP Crawford 17 Star Premier THERE is still time to was won by Pat and David Hancock,

1 Star Master June, featuring Swiss Pairs for those below the rank of 2 Star Master

Advanced Master pectively. (See advert on page 10 of the were 2nd and Gillian Toogood – Mike

District Master round of the NICKO competition. Dave

Mr D King Latchem’s team had an excellent win to

Mrs M Scurlock mons match, although this time the held at Oake Village Hall on June 27.

6 Star Premier Lords inflicted their revenge for a sound

Mrs A Lister Mrs B Walker Hackett. One point behind were Mike

Mr M Lister 3 Star Master Amos and Peter Foster. In the teams it

ional Masters category at the Ranked

the Under 25s at the Easter Festival

All OBA members are invited to

Mr RM Blackmore Club Master (away but played at Leicester). June 26- The final of the Staffs Cup was

Life Master www.somersetbridge.org.uk for all of the 48 boards with Dan Crofts’

Mrs JVA Fielder and qualified for the Crockfords Final, as

and Helen Sealy – Gilliam Toogood 3rd. for being the top-ranked Suffolk player